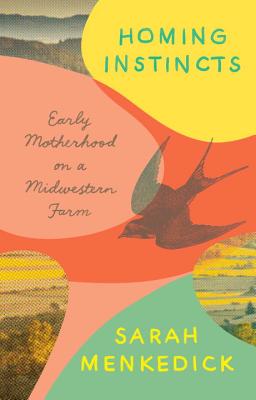 Early Motherhood on a Midwestern Farm

Sarah Menkedick spent her twenties trekking alone across South America, teaching English to recalcitrant teenagers on Reunion Island, picking grapes in France and camping on the Mongolian grasslands; for her, meaning and purpose were to be found on the road, in flight from the ordinary. Yet the biggest and most transformative adventure of her life might be one she never anticipated: at 31, she moves into a tiny 19th-century cabin on her family's Ohio farm, and begins the journey into motherhood.

In eight vivid and boldly questioning essays, Menkedick explores the luminous, disorienting time just before and after becoming a mother. As she reacquaints herself with the subtle landscapes of the Midwest, and adjusts to the often surprising physicality of pregnancy, she ruminates on what this new stage of life means for her long-held concepts of self, settling, and creative fulfillment. In “Millie, Mildred, Grandma Menkedick,” she considers the nature of story through the life of her tough German grandmother, who raised two boys as a single mother in the 1950s and then spent her seventies traveling the world with her best friend Marge; in “Motherland,” on a trip back to Oaxaca, Mexico to visit her husband’s family, she finally embraces her Midwestern roots; in “The Milk Cave,” she discovers in breastfeeding a new appreciation for the spiritual and artistic potential of boredom; and in “The Lake,” she revisits her childhood with her father, whose relentless optimism and mystical streak she sees anew once she has a child of her own.

A story of a traveler come home to the farm; of becoming a mother in spite of reservations and doubt; and of learning to appreciate the power and beauty of the quotidian, Homing Instincts speaks to the deepest concerns and hopes of a generation.


Praise For Homing Instincts: Early Motherhood on a Midwestern Farm…

"Menkedick is a superb storyteller and her writing is filled with remarkable scientific and literary references. She explores her reinvigorated relationship with the Midwestern landscape, seeing quiet beauty in an environment she once longed to leave behind. She details the normal day-to-day tensions between her and her husband during the pregnancy. She takes comfort in her close family relationships while contemplating her new identity as a pregnant woman and mother-to-be. This is a moving and deeply personal look at one woman’s transformation." —Publishers Weekly

"Menkedick's writing is insightful and evocative, drawing on all the senses, and readers will be impressed by the sense of place in her writing, even while she's laboring to discern the meaning in her experience. Menkedick's driving question is to figure out “whether returning home signifies growing up or giving up or both—and if it’s both, what exactly we want to give up in exchange for what.” The magic of this book is that she makes so personal a question so easily accessible to readers." —Kirkus

"Her meditations on pregnancy shift like the tide as she propels herself outward, recalling past travels, and then draws inward, reflecting on her newfound stillness. As a new mother, Menkedick strives to hold on to her artist lifestyle despite the pressure of today’s parenting conventions, hoping instead to live slowly and in the moment with her young family. 'This is the mystery: moments of calm knowing that contain within them nothing larger than the everyday.- Menkedick’s first book gracefully encourages careful introspection and finding one’s true self and place among the everyday moments." —Booklist

"In the eight essays that comprise this poignant, probing memoir, Menkedick contemplates the mysteries of motherhood and the surprising pleasures of establishing a permanent home—a place where she can write, reflect and prepare for the arrival of her daughter. 'For the first time, I recognize this delving into my own heart, mind, and body as a journey,' she says. This revealing book is a lovely exercise in self-inquiry that will resonate with mothers-to-be."–Bookpage
"This debut breaks any existing stereotype of memoir about pregnancy and motherhood. The eight long essays are meandering, smart, and packed with cultural, literary, and scientific references. It is a long trek through the mind of the author, whose stunning intellect is matched by her initial resistance to the insights she eventually gains. Readers get to wade through her stubbornness, how enamored she has been with her previous lifestyle—traveling the world, going to China on a whim, being unfettered—and then experience her agitation with the realities of pregnancy and motherhood—a trip from which there is no return." —New York Journal of Books

“An emotionally raw, tender, and hauntingly precise meditation of impending motherhood, Homing Instincts put me under its spell and brought me such joy. This is a book that makes me want to take a walk in the woods with my dog and rediscover solitude. Menkedick wrestles with what it means to be home, and redefines herself while wandering fiercely toward the unfamiliar in this stunning debut collection.” —Jeanne Marie Laskas, best-selling author of Concussion

“A bold and lyric debut, Homing Instincts is a rapturous meditation on motherhood and modern femininity. Poetic in its prose, Menkedick explores the corners of our globe both near and far, offering heart, humor, and grace.” —Amy Butcher, author of Visiting Hours

SARAH MENKEDICK's work has been featured in Harper's, Pacific Standard, Oxford American, Aeon, Guernica, The Paris Review Daily, and elsewhere. She holds an MFA in nonfiction from the University of Pittsburgh, and she was a 2015-2016 Fulbright fellow in Mexico. Sarah is the founder of Vela, an online magazine of nonfiction writing by women.