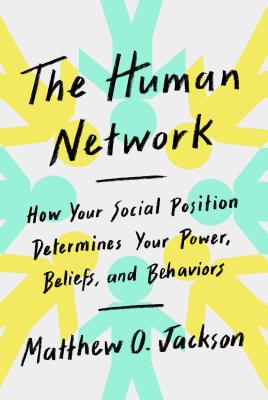 How Your Social Position Determines Your Power, Beliefs, and Behaviors

Here is a fresh, intriguing, and, above all, authoritative book about how our sometimes hidden positions in various social structures—our human networks—shape how we think and behave, and inform our very outlook on life.

Inequality, social immobility, and political polarization are only a few crucial phenomena driven by the inevitability of social structures. Social structures determine who has power and influence, account for why people fail to assimilate basic facts, and enlarge our understanding of patterns of contagion—from the spread of disease to financial crises. Despite their primary role in shaping our lives, human networks are often overlooked when we try to account for our most important political and economic practices. Matthew O. Jackson brilliantly illuminates the complexity of the social networks in which we are—often unwittingly—positioned and aims to facilitate a deeper appreciation of why we are who we are.

Ranging across disciplines—psychology, behavioral economics, sociology, and business—and rich with historical analogies and anecdotes, The Human Network provides a galvanizing account of what can drive success or failure in life.

Praise For The Human Network: How Your Social Position Determines Your Power, Beliefs, and Behaviors…

"Compelling... Why can’t money buy you mobility? The Human Network is most fascinating and convincing in addressing this question... Professor Jackson manages not only to present a lot of complex research engagingly but to show how the key concepts of network theory relate to a wide range of contemporary issues, from financial contagions to the spread of fake news."
—The New York Times

"A mixture of delicious truths and ingenious sociological concepts that will convince most readers that we pay too much attention to the people around us."—Kirkus Reviews

“Networks show up as powerful forces in virtually every social science. The same phenomena appear in different disguises in different disciplines, but few scholars have the intellectual breadth to recognize these common behavior patterns, and fewer still have the ability to communicate effectively with a broad and diverse audience. Matt Jackson is one such person, and his book is a welcome introduction to this fascinating subject.” —Hal Varian, chief economist at Google

“Civilization depends on connections between people—on ‘the human network’—for trade, cooperation, and communication. In this beautifully readable and fascinating book, Matt Jackson shows that the science of networks can help answer deep questions such as why inequality and polarization arise, and how biological and financial epidemics spread.” —Eric S. Maskin, Nobel Laureate in Economics, Harvard University

“Much of what we do, and even quite a bit of what we think, is shaped by our friends, neighbors, coworkers, and increasingly our social media connections. This thought-provoking book explains how and why human networks matter so much, and why they can be a source of strength and fragility. A must-read.” —Daron Acemoglu, Professor of Economics, MIT, and co-author of the New York Times best-seller Why Nations Fail

“Spanning a rich array of topics, including the spread of epidemics and financial crises, political polarization, and economic inequality, The Human Network is a highly readable yet deeply informed survey of social life viewed through the lens of networks. Matt Jackson proves that he is not only one of the world’s leading theorists of network science; he is also one of its best expositors.” —Duncan Watts, principal researcher at Microsoft and author of Six Degrees: The Science of a Connected Age

“Matthew Jackson leads us through a brilliantly insightful tour of how the structures of social networks shape our lives and indeed our very humanity.” —Roger Myerson, Nobel Laureate in Economics, University of Chicago

MATTHEW O. JACKSON is the William D. Eberle Professor of Economics at Stanford University, an external faculty member of the Santa Fe Institute, and a senior fellow of the Canadian Institute for Advanced Research. He has been researching social and economic networks for more than twenty-five years and has published Social and Economic Networks, a leading graduate-level text on the subject. Jackson is a member of the National Academy of Sciences; a fellow of the American Academy of Arts and Sciences, the Econometric Society, and the Game Theory Society; an Economic Theory Fellow; and former Guggenheim Fellow. He has reached more than a million students via his popular online courses on social and economic networks and game theory.
Loading...
or support indie stores by buying on