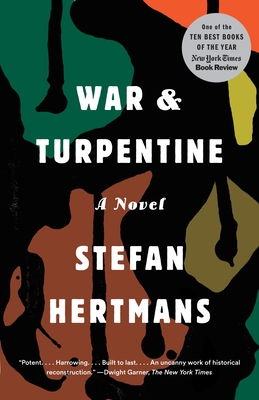 A New York Times Top 10 Best Book of the Year

The story of Urbain Martien lies con­tained in two notebooks he left behind when he died. In War and Turpentine, his grandson, a writer, retells his grandfather’s story, the notebooks providing a key to the locked chambers of Urbain’s memory.

But who is he, really? There is Urbain the child of a lowly church painter; Urbain the young man, who narrowly escapes death in an iron foundry; Urbain the soldier; and Urbain the man, married to his true love's sister, haunted by the war and his interrupted dreams of life as an artist. Wrestling with this tale, the grandson straddles past and present, searching for a way to understand his own part in both. As artfully rendered as a Renais­sance fresco, War and Turpentine paints an ex­traordinary portrait of  a man, re­vealing how a single life can echo through the ages.

Praise For War and Turpentine: A Novel…

“Potent. . . . Harrowing. . . . War and Turpentine is billed as a novel, but that's hardly the word for it. It's an uncanny work of historical reconstruction . . . a gritty yet melancholy account of war and memory and art that may remind some readers of the work of the German writer W. G. Sebald.” —The New York Times

“A masterly book about memory, art, love and war. . . . Affords the sensory pleasures of a good novel while also conveying the restlessness of memoir. . . . A blast of narrative fresh air.” —The New York Times Book Review

“A lovingly reimagined life of an ordinary man whose life was forever marked by the first world war." —The Economist (Best Book of the Year)

“A rich fictionalized memoir. . . . Death, destruction, obligation, duty--Urbain faces them all and yet he still finds joy in life.” —The Times (UK)

“A future classic. . . . A book that lies at the crossroads of novel, biography, autobiography and history, with inset essays, meditations, pictures. . . . Every detail has the heightened luminosity of poetry." —The Guardian

"Using the methods of narrative collage. . . and affectionate detective work—the writer evokes his grandfather's life in full. . . . Hertmans provides a richly detailed excavation of a life and a thoughtful exploration of familial memory." —Kirkus

STEFAN HERTMANS is an internationally acclaimed Flemish author. For more than twenty years he was a professor at the Royal Academy of Fine Arts, Ghent, where he wrote novels, poems, essays, and plays. War and Turpentine was awarded the prestigious AKO Literature Prize in 2014.

Translated from the Dutch by David McKay.
Loading...
or support indie stores by buying on