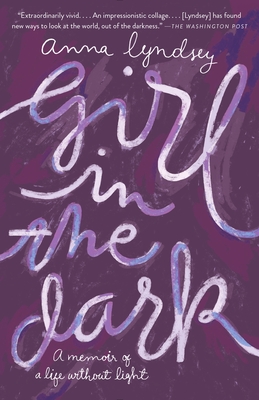 A Memoir of a Life Without Light

Once, Anna Lyndsey had an ordinary life. She was young and ambitious and worked hard, she had just bought an apartment, she was falling in love. Then what began as a mild intolerance to certain kinds of artificial light developed into a severe sensitivity to all light. Now, at the worst times, Anna must spend months on end in a blacked-out room, where she loses herself in audiobooks and elaborate word games in an attempt to ward off despair. During periods of relative remission, she can venture out cautiously at dawn or dusk into a world that overwhelms her starved senses with its beauty.

Eventually, Anna’s unthinkable fate becomes a transcendent love story, offering an extraordinary perspective from which we can see light and the world anew.

Praise For Girl in the Dark: A Memoir of a Life Without Light…

“Extraordinarily vivid. . . . [Lyndsey] has found new ways to look at the world, out of the darkness.”
—The Washington Post

“Melodic, penetrating. . . . [Girl in the Dark] reveals the quiet, ingenious consciousness of a poet.”
—The New York Times Book Review

“What stays with the reader is [Lyndsey’s] gutsiness, her imagination and fortitude.”
—Minneapolis Star Tribune

“This book about darkness shines. . . . Its honesty, bravery and touches of black comedy will be a help to anyone suffering from a chronic illness as well as to those who—at least for now—are spared.”
—The Sunday Times (London)

“The premise of Girl in the Dark seems lifted out of a Gothic novel: a woman whose flesh is burned by light is confined to a dark box of a room. But this story is so much more than a medical mystery or a nightmarishly true tale. I read this book, a memoir that reads like an epic poem, pen in hand, feverishly underlining sentence after sentence. . . . This book is a gift, a testament to the power of art as a saving grace.”
—Susannah Cahalan, author of the New York Times bestseller Brain on Fire

“A little masterpiece. . . . A luminous account that celebrates everything that is best about being human.”
—Mail on Sunday (London)

“Stories about illness or adversity often end up feeling like self-help books. Not this one. . . . Her insights jump off the page like challenges… [An] extremely readable and upliftingly brave memoir.”
—Sydney Morning Herald

“Sparkles with dark humor and wonder at the world . . . beautifully affecting. . . . A tribute to the power of humanity, generosity and endurance, Girl in the Dark is incredibly powerful stuff.”      —The Guardian (London)

“Her prose is disorienting and dreamy, a nonlinear string of impressions that tries to capture what it feels like to live in the dark. . . .There is something ecstatic—erotic, even—about her sense impressions.”
—NPR Books

“In this astonishing memoir Anna Lyndsey takes us into the world of a rare and shocking illness, and we emerge awed by a shining love story. Anna writes with such honesty and grace and mischief about how her condition forces her to retreat into blackness—yet we see that this new space she so bravely creates for herself is suffused with light.”
—Sonali Deraniyagala, author of Wave, winner of the PEN/Ackerly Prize and finalist for the National Book Critics Circle Award

“[Lyndsey] has taken her dark world and infused it with a luminous clarity and a quietly self-deprecating humour.”
—The Toronto Star

“Deeply affecting. . . . Working gingerly with the array of metaphors that emerge from darkness and offering small, telling details, Lyndsey achieves a powerful assertion of self against the eclipse of all that she used to hold dear in the realm of light.”
—Publishers Weekly

Anna Lyndsey is a pen name. Lyndsey worked for several years in London as a civil servant until she became ill. She now lives with her husband in Hampshire, England.
Loading...
or
Not Currently Available for Direct Purchase