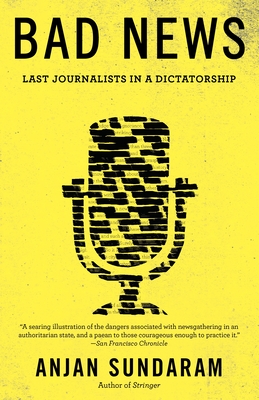 Last Journalists in a Dictatorship

In 2009, Anjan Sundaram began a journalist's training program in Kigali, the capital of Rwanda. Often held up as a beacon of progress and modernity in Central Africa, the regime of President Paul Kagame—which took over after the 1994 genocide ravaged Rwanda’s population—has been given billions of dollars in Western aid. And yet, during Sundaram’s time there, almost every reporter he instructed was arrested or forced to leave the country, caught in a tightening web of strict media control.

With Bad News, Sundaram offers an incredible firsthand look at the rise of dictatorship and the fall of free speech, one that’s important to understand not just for its implications in Rwanda, but for any country threatened by demands to adopt a single way of thinking.

ANJAN SUNDARAM is the author of Bad News: Last Journalists in a Dictatorship and Stringer: A Reporter's Journey in the Congo. An award-winning journalist, he has reported from central Africa for the New York Times and the Associated Press. His writing has also appeared in Granta, The Guardian, Observer, Foreign Policy, Politico, Telegraph and The Washington Post. His war correspondence from the Central African Republic won a Frontline Club Award in 2015, and his reporting on Pygmy tribes in Congo's rainforests won a Reuters prize in 2006. His work has also been shortlisted for the Prix Bayeux and the Kurt Schork award. Stringer was a Royal African Society Book of the Year in 2014. Anjan graduated from Yale University.

Praise For Bad News: Last Journalists in a Dictatorship…

"It is nothing less than the best book written about Rwanda by an outsider, a massively important contribution to understanding what is one of Africa's most important, inscrutable, regimes."
—Richard Poplak, All Africa

“A searing illustration of the dangers associated with newsgathering in an authoritarian state, and a paean to those courageous enough to practice it in such dire circumstances." —San Francisco Chronicle

“This … evocative account, focusing on young journalists struggling to gain the rights they so richly deserve, provides insights about the human condition that reach far beyond the tragic story of Rwanda.” —Noam Chomsky

“[A] recognition of how fear can be used to seep into any society, subtly at first, and then malignantly transformative.” —Pittsburgh Post-Gazette

“An unsettling account of journalists under fire﻿.” —Foreign Affairs

“Once in a while, a book comes along with the potential to alter our understanding of a place and its history. Anjan Sundaram’s Bad News: The Last Journalists in a Dictatorship, which exposes the repression endured in one of the world’s poorest countries, is one such work. . . . Make no mistake about it: there is a war going on against legitimate journalism the world over. . . . With Bad News, Sundaram boldly strikes back at the powers that be and his aim is true. Sundaram has pulled back a weighty veil and exposed layers of manipulation that are—for most of us—almost impossible to see." —African Arguments

“Superb. Anjan Sundaram is one of the finest writers of reportage and non-fiction we have. Here he explores the mechanics and psychology of dictactorship in genocide-haunted Rwanda. Why the West continues to support this regime is one of many important questions he raises.” —Richard Grant, author of Dispatches from Pluto

“A superb expose of a dictatorship” —The Observer (London)

“Powerful and shocking. . . . A damning indictment not only of the Rwandan regime, but also the western governments and agencies that have failed to question its practices.”
—The Times (London)

“Anjan Sundaram is a keen observer and a fine writer. In Bad News, he has rendered a chilling chronicle of the creeping totalitarianism taking hold in Rwanda that is as disturbing as it is unforgettable.” —Jon Lee Anderson, author of Che Guevara

“A chilling account of reporters in danger that heightens awareness of the importance of a free press.” —Kirkus Reviews

“One of the finest works of reportage in living memory.”﻿ —The Australian

“Bad News is an attempt to shed light on a side of Rwanda hidden to most foreigners, but also a memorial to those who give their lives, well-being and even their sanity to the cause of free speech.” ﻿﻿—Shelf Awareness
or support indie stores by buying on
Copyright © 2020 American Booksellers Association