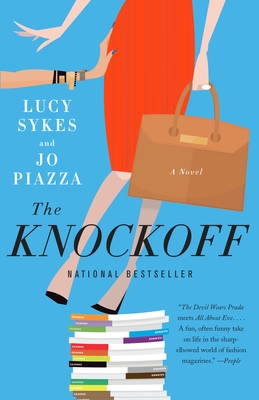 As editor in chief of Glossy magazine, Imogen Tate is queen of the fashion world … until Eve, her conniving twenty-something former assistant, returns from business school with plans to knock Imogen off her pedestal, take over her job, and re-launch Glossy as an app.

Suddenly, the Louboutin is on the other foot; Imogen may have Alexander Wang and Diane von Furstenberg on speed dial, but she doesn’t know Facebook from Foursquare and once got her phone stuck in Japanese for three days. But Imogen will do anything to reclaim her kingdom—even if it means channeling her inner millennial and going head to head with a social-media monster.

Praise For The Knockoff: A Novel…

A People "Book of the Week"

“The Devil Wears Prada meets All About Eve. . . . A fun, often funny take on life in the sharp-elbowed world of fashion magazines.” —People

“The only beach read you should be seen with.”—Town and Country

“Reminds us that no one is safe from the wily, ambitious up-and-comer—and that sometimes it’s better to beat her than join her!” —Stacy London, co-host of What Not to Wear

“Humor with style and heart.” —Glamour

“A behind-the-scenes send-up of the fashion industry and all the craziness that ensues.”
—Vanity Fair

“This is what it’s really like working at a glossy, New York fashion magazine. Makes The Devil Wears Prada look like My Little Pony.” —Toby Young, bestselling author of How to Lose Friends and Alienate People

“Pits over-confident millennials against technologically incompetent Gen X’ers and adds fashion, drama and a pinch of humor to make for a soon-to-be classic.” —The Hollywood Reporter

“Don’t let the cover of Lucy Sykes’ and Jo Piazza’s new novel The Knockoff fool you into thinking this is a chick lit romp. It has the requisite strong heroine and mean girl villain, but it also raises questions about tensions—or maybe outright loathing—between generations as technology rules our world. . . . Most delicious, and funny.” —The Pioneer Press (St. Paul, MN)


“Snarky. . . . A spin on the classic hero-villain plotline . . . relatable to both the tech savvy and the tech wary.” —VanityFair.com

“In the interest of full disclosure I must reveal that Lucy is my MUCH older twin (by over half an hour). So I am biased. But even if Lucy weren’t my sister, I would still say that The Knockoff is a bang-on, absolutely of-the-moment, super-trendy, amazingly witty take on the world of online and magazine fashion.”  —Plum Sykes, bestselling author of Bergdorf Blondes


“Sleek and satisfying. . . . Don’t cast this off as fluff: true, it’s glossy and catty and shamelessly satirical, but The Knockoff remains reverent to the fashion industry, paying homage to the brilliant designers and editors and—let’s face it—bloggers and street style stars who are today’s real tastemakers.” —Bustle

“Warning: you will laugh out loud, so read in public at your own risk.” —The Skimm


“There’s nothing better than a fun, guilty pleasure you can’t put down or a book that keeps you planted in your beach chair until the sunlight fails and you rush home to keep reading under the porch light.” —The Daily News


“Sykes and Piazza brilliantly satirize and skewer the freakiest aspects of today’s changing fashion landscape with all its blogtastic insanity. Bravo girls!” —Simon Doonan, Creative Ambassador for Barneys New York and author of The Asylum: True Tales of Madness from a Life in Fashion

Jo Piazza is an award-winning journalist and editor. She has written for The Wall Street Journal, Elle, Glamour, The New York Times, New York magazine, Marie Claire and Redbook.
She is the author of Celebrity, Inc.: How Famous People Make Money and a novel, Love Rehab: A Novel in 12 Steps and If Nuns Ruled the World: Ten Sisters on a Mission. She lives in San Francisco with her husband and giant dog.
Loading...
or
Not Currently Available for Direct Purchase