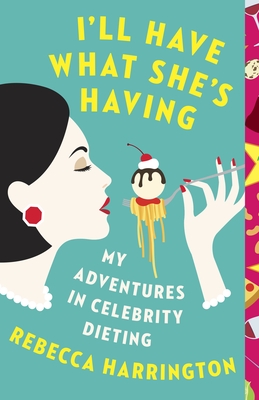 I'll Have What She's Having

My Adventures in Celebrity Dieting

Praise For I'll Have What She's Having: My Adventures in Celebrity Dieting…

“Over the course of I’ll Have What She’s Having, Ms. Harrington eats like 14 different celebrities, both dead and alive. Among them: Madonna , Jackie Kennedy, Marilyn Monroe , Karl Lagerfeld, Dolly Parton, and the GOOP goddess herself, Gwyneth Paltrow . . . The writing—though not the food—is delectable.” – Bari Weiss, The Wall Street Journal

“Novelist Harrington (Penelope) undertakes a hilariously ill-advised experiment in celebrity diets ranging from Beyoncé’s master cleanse lemonade with cayenne pepper and maple syrup to Karl Lagerfeld’s guzzling reliance on Diet Coke... While the content is mostly lighthearted and humorous, there is a palpable undercurrent of sharp feminist commentary.” -- Publisher's Weekly

“After the sugar-rush of the holidays come the January diet books. One of the most entertaining is I’ll Have What She’s Having: My Adventures in Celebrity Dieting by Rebecca Harrington . . . It’s both hilarious and sad to think of Gwyneth Paltrow subsisting on kale juice and raw almonds soaked in water, or Dolly Parton trying to slim down on vats of cabbage soup. In the end, Harrington decides, we should quit worrying about being perfect, and have a slice of pizza.” – Minneapolis Star-Tribune (“Five Faves of the Week”)

“Harrington delves into the lives of legendary beauties in the most personal way possible: by emulating their diets. From Greta Garbo to Beyoncé, Harrington chronicles the food and fitness regimens that may or may not transform us into svelte stars, too . . . Hilariously humanizing.” – TimeOut

“While this is not a “tell-all” of When Harry Met Sally, Harrington’s new book gives readers the inside scoop of what celebrities do to diet. Harrington actually tries these diets—including Pippa Middleton’s haggis and Beyoncé’s ‘salt water flush’ in this hilarious account.” – The Reading Room

“If you're hoping to take a critical look at the odd and interesting ways famous people eat, you'll enjoy digging in to Harrington's short, quippy book . . . Pop culture enthusiasts will devour it.” – StyleBistro Book Club: January 2015

Rebecca Harrington is the author of the novel Penelope. She studied history and literature at Harvard and journalism at Columbia. Her work has appeared in New York Magazine, The New York Times,NPR.com and other publications. She lives in New York City.
Loading...
or
Not Currently Available for Direct Purchase