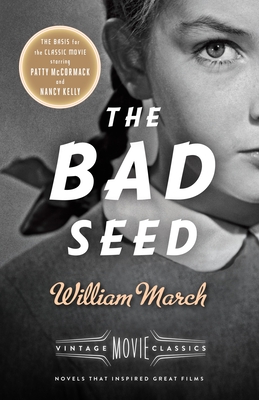 The bestselling novel that inspired Mervyn LeRoy’s classic horror film about the little girl who can get away with anything—even murder.

There’s something special about eight-year-old Rhoda Penmark. With her carefully plaited hair and her sweet cotton dresses, she’s the very picture of old-fashioned innocence. But when their neighborhood suffers a series of terrible accidents, her mother begins to wonder: Why do bad things seem to happen when little Rhoda is around?

Originally published in 1954, William March’s final novel was an instant bestseller and National Book Award finalist before it was adapted for the stage and made into a 1956 film. The Bad Seed is an indelible portrait of an evil that wears an innocent face, one which still resonates in popular culture today.

With a new foreword by Anna Holmes.

Vintage Movie Classics spotlights classic films that have stood the test of time, now rediscovered through the publication of the novels on which they were based.

Praise For The Bad Seed: A Vintage Movie Classic…

“William March knows where human fears and secrets are buried. . . . Nowhere is this gift better displayed than in The Bad Seed.” —The New York Times

“An impeccable tale of pure evil.” —The Atlantic

William March (1893–1954), born William Edward March Campbell in Mobile, Alabama, was an American novelist and short-story writer. He served in the Marines during World War I, and was recognized with the Distinguished Service Cross, the Navy Cross, and the Croix de Guerre. His first novel, Company K, was based largely on his wartime experiences. A prolific writer of short stories, he was a four-time winner of the O. Henry Prize. The Bad Seed was an immediate critical and commercial success, the source for a Tony Award-winning Broadway play and a finalist for the National Book Award. Sadly, March died of a heart attack just weeks after publication.
Loading...
or support indie stores by buying on