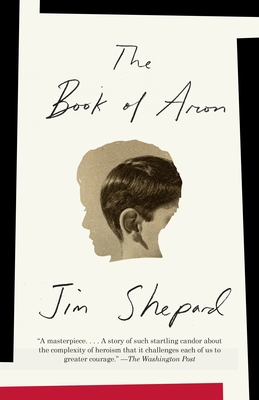 Small and sullen, Aron is eight years old when his family moves from a rural Polish village to hectic Warsaw.  At first gradually and then ever more quickly, his family’s opportunities for a better life vanish as the occupying German government imposes harsh restrictions.  Officially confined to the Jewish quarter, with hunger, vermin, disease and death all around him, Aron makes his way from apprentice to master smuggler until finally, with everyone for whom he cared stripped away from him, his only option is Janusz Korczak, the renowned doctor, children’s rights advocate, and radio host who runs a Jewish orphanage. And Korczak in turn awakens the humanity inside the boy.

Praise For The Book of Aron…

Winner of the Sophie Brody Medal for Excellence in Jewish Literature

“A masterpiece. . . . A story of such startling candor about the complexity of heroism that it challenges each of us to greater courage.” —The Washington Post

“Immensely rewarding, shocking and beautiful. . . . Shepard, who for years has been one of this country’s greatest fiction writers, is as original here as he has ever been.” —NPR

“Transcendent . . . [The Book of Aron] reminds us of the infinite varieties of good and evil, and of the many paradoxical places in between. . . . Enormous power comes from its stylistic restraint [and] dignity flows from its utter lack of pretension.” —The San Francisco Chronicle

“Stark . . . brilliant, iconic. . . . Ranks with the best literature that explores the dark side of the human soul.” —The Toronto Star

“Shepard has distilled his meticulous research into a swift, savage narrative. . . . So rigorous and adroit in its handling of its horrific subject matter, it makes you want to investigate everything else Shepard has written.” —The Seattle Times

“Extraordinary. . . .This is a book about annihilation, and the human spirit that somehow lives on, in slivers and cracks.” —Los Angeles Review of Books

“At once heartbreaking, refreshing and—hardest won of all—enchanting. Jim Shepard’s novel enters a crowded canon and it stands there, head and shoulders, with the best.” —The Jewish Quarterly

“A masterpiece [about] the possibilities of love and heroism—and their limits.” —The Times (London)
“If Aron owns the rights to the book’s seductive narrative voice, it is Korczak who embodies its enveloping humanity. . . . [They] walk into the fire, lifting The Book of Aron into a realm with the finest Holocaust fiction.” —The Boston Globe

“It is the relationship between Aron and Korczak that sits at the heart of the novel [and] it is in the orbit of this entirely good man that Aron’s scarred heart begins to heal and expand.” —Geraldine Brooks, The New York Times Book Review

“Makes us feel anew the bewilderment and horror of that time and place. . . . Flat-out brilliant and deeply empathetic.” —Guernica

“A work of art. . . . Shepard turns hell into a testament of love and sacrifice.” —Joshua Ferris, The Guardian (London)

“[Shepard has] given the story an urgency and immediacy that made this reviewer read the entire book in only two sittings. . . . A tragedy of heroism, exquisitely written and devastating as it progresses.” —Greg Walkin, The Lincoln Journal-Star
“[A] magnificent tour de force. . . . Shepard [is] a writer of extraordinary historical vision, psychological acuity, and searing irony.” —Booklist (starred review)

JIM SHEPARD is the author of six previous novels and four story collections, including Like You’d Understand, Anyway, which was a finalist for the National Book Award and won The Story Prize. His short fiction has appeared in, among other magazines, The New Yorker, Harper’s Magazine, McSweeney’s, The Paris Review, The Atlantic, Esquire, Tin House, Granta, Zoetrope, Electric Literature, and Vice, and has often been selected for The Best American Short Stories and The PEN/O. Henry Prize Stories. He lives in Williamstown, Massachusetts, with his wife and three children, and teaches at Williams College.
Loading...
or support indie stores by buying on