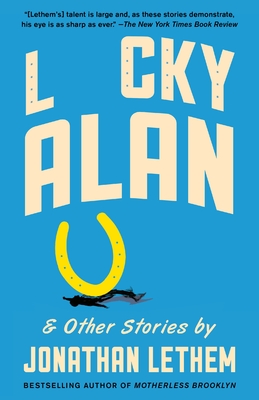 and Other Stories (Vintage Contemporaries)

With his celebrated wit and invention, Lethem brilliantly transforms the real into the surreal, uncovering the absurdity always lurking in the mundane, the twin forces of humor and tragedy that bracket experience, and the lasting desire—even in the face of all that goes awry—for human connection.

Praise For Lucky Alan: and Other Stories (Vintage Contemporaries)…

“Rich and darkly comic. . . . Astutely cunning social and political satires sit alongside experimental flights of absurdist fantasy and parable, with traces of Lethem’s unique slant on magical realism sprinkled in as well. Comparisons might be drawn to writers ranging from Jorge Luis Borges and Haruki Murakami to Margaret Atwood and J. D. Salinger. All of Lethem’s stories are enlivened by his wit and provocative wordplay.” —Chicago Tribune

“Lethem works in an interesting literary space between realism and absurdism, modernism and postmodernism, satire and a particular brand of [Don] DeLillo-inspired darkness. . . . His talent is large.” —The New York Times Book Review

“Lethem’s words execute graceful turns and explosive leaps to whatever tempo he sets. . . . Rewards await the reader who commits to this slim volume. . . . Lucky Alan is a beguiling addition to a shelf full of uniquely inventive books by a master of genres.” —The Miami Herald

“A great introduction to the sometimes heartbreaking, often surreal world of Jonathan Lethem. . . . A testament to the writer’s refusal to play by the rules.” —NPR Books

“Taut, darkly funny. . . . [Lucky Alan] excels at creating these moments of absurdity that exist not merely for their own sake, but on some level to expose our own tendency to accept the unacceptable, to live hypocritically, and to assuage our guilt with comforting words and superficialities rather than meaningful action.” —The Huffington Post

“A wild ride across the boundaries of language, artifice and genre. . . . This is the joy of reading Jonathan Lethem: you never know what you’re going to get. . . . You might guess that Alan’s luck runs out, but you’ll never guess quite how: Lethem is always one step ahead.” —Financial Times (London)

Jonathan Lethem is the New York Times bestselling author of nine novels, including Dissident Gardens, Chronic City, The Fortress of Solitude, and Motherless Brooklyn, and of the essay collection The Ecstasy of Influence, which was a National Book Critics Circle Award finalist. A recipient of the MacArthur Fellowship and winner of the National Book Critics Circle Award for Fiction, Lethem’s work has appeared in The New Yorker, Harper’s Magazine, Rolling Stone, Esquire, and The New York Times, among other publications.
Loading...
or
Not Currently Available for Direct Purchase