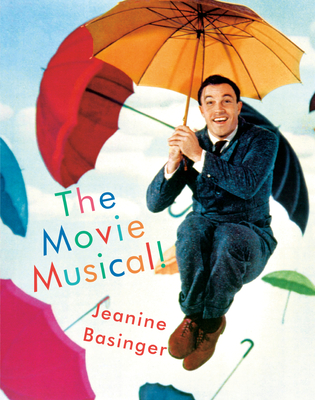 Irresistible and authoritative, The Movie Musical! is an in-depth look at the singing, dancing, happy-making world of Hollywood musicals, beautifully illustrated in color and black-and-white--an essential text for anyone who's ever laughed, cried, or sung along at the movies.

Leading film historian Jeanine Basinger reveals, with her trademark wit and zest, the whole story of the Hollywood musical--in the most telling, most incisive, most detailed, most gorgeously illustrated book of her long and remarkable career.
From Fred Astaire, whom she adores, to La La Land, which she deplores, Basinger examines a dazzling array of stars, strategies, talents, and innovations in the history of musical cinema. Whether analyzing a classic Gene Kelly routine, relishing a Nelson-Jeanette operetta, or touting a dynamic hip hop number (in the underrated Idlewild), she is a canny and charismatic guide to the many ways that song and dance have been seen--and heard--on film.
With extensive portraits of everyone from Al Jolson, the Jazz Singer; to Doris Day, whose iconic sunniness has overshadowed her dramatic talents; from Deanna Durbin, that lovable teen-star of the '30s and '40s; to Shirley T. and Judy G.; from Bing to Frank to Elvis; from Ann Miller to Ann-Margret; from Disney to Chicago . . . focusing on many beloved, iconic films (Top Hat; Singin' in the Rain; Meet Me in St. Louis; The Sound of Music) as well as unduly obscure gems (Eddie Cantor's Whoopee!; Murder at the Vanities; Sun Valley Serenade; One from the Heart), this book is astute, informative, and pure pleasure to read.

JEANINE BASINGER is the founder of the department of film studies at Wesleyan University and the curator of the cinema archives there. She has written eleven other books on film, including I Do and I Don't; The Star Machine; A Woman's View; Silent Stars, winner of the William K. Everson Film History Award; Anthony Mann; The World War II Combat Film; and American Cinema: One Hundred Years of Filmmaking, the companion book for a ten-part PBS series. She lives in Middletown, CT, Madison, WI, and Brookings, SD.

Praise For The Movie Musical!…

"An in-depth look at the Hollywood musical ... lively and informative ... the author is the perfect guide ... movie buffs and film students alike will applaud this delightful and insightful work."--Library Journal (starred review)

"A lively history ... an essential addition to any film lover's library."--Kirkus