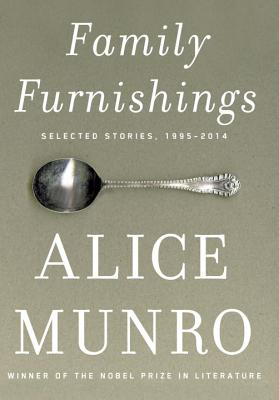 From the winner of the 2013 Nobel Prize in Literature and one of our most beloved writers a new selection of her peerless short fiction, gathered from the collections of the last two decades, a companion volume to Selected Stories (1968-1994).
Family Furnishings brings us twenty-four of Alice Munro's most accomplished, most powerfully affecting stories, many of them set in the territory she has so brilliantly made her own: the small towns and flatlands of southwestern Ontario. Subtly honed with her hallmark precision, grace, and compassion, these stories illuminate the quotidian yet extraordinary particularity in the lives of men and women, parents and children, friends and lovers as they discover sex, fall in love, part, quarrel, suffer defeat, set off into the unknown, or find a way to be in the world.
Peopled with characters as real to us as we are to ourselves, Munro's stories encompass the fullness of human experience from the wild exhilaration of first love, in Passion, to the lengths a once-straying husband will go to make his wife happy as her memory fades, in The Bear Came Over the Mountain. Other stories suggest the punishing consequences of leaving home ( Runaway ) or leaving a marriage ( The Children Stay ). The part romantic love plays in one's existence is explored in Too Much Happiness, based on the life of the noted nineteenth-century mathematician, Sophia Kovalevsky. And in stories that Munro has described as closer to the truth than usual Dear Life, Working for a Living, and Home among them we glimpse the author's own life.
As the Nobel Prize presentation speech says in part: Reading one of Alice Munro's texts is like watching a cat walk across a laid dinner table. A brief short story can often cover decades, summarizing a life, as she moves deftly between different periods. No wonder Alice Munro is often able to say more in thirty pages than an ordinary novelist is capable of in three hundred. She is a virtuoso of the elliptical and the master of the contemporary short story.

Alice Munro grew up in Wingham, Ontario, and attended the University of Western Ontario. She has published thirteen collections of stories and a novel. During her distinguished career she has been the recipient of many awards, including two Giller Prizes, the National Book Critics Circle Award, and the Man Booker International Prize. In 2013 she was awarded the Nobel Prize for Literature. Her stories have appeared in The New Yorker, Atlantic Monthly, Harper s Magazine, The Paris Review, Granta, and many other publications, and her collections have been translated into thirteen languages. She lives in Port Hope, Canada, on Lake Ontario."
Loading...
or
Not Currently Available for Direct Purchase