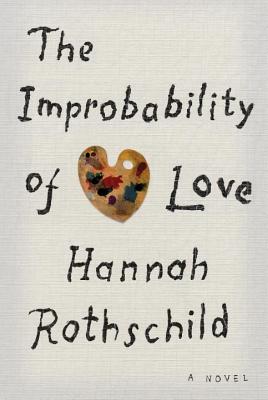 The Improbability of Love

“A girl, a painting, and a cast of delightfully quirky characters are at the heart of Rothschild's debut. At the intersection of London's art auction houses and the pursuit of a dream, Annie navigates her way through the city's wealthy and aspiring elite as she juggles her mother's eccentricities with her own quest to become a chef. Funny, smart, and satisfyingly clever, The Improbability of Love will warm your heart and give you pause the next time you admire that old painting hanging, so innocently, on the wall.”
— Lisa Baudoin, Books & Company, Oconomowoc, WI
View the List

Wickedly funny, this totally engaging, richly observed first novel by Hannah Rothschild is a tour de force. Its sweeping narrative and cast of wildly colorful characters takes you behind the scenes of a London auction house, into the secret operations of a powerful art dealer, to a flamboyant eighteenth-century-style dinner party, and into a modest living room in Berlin, among many other unexpected settings.

In The Improbability of Love we meet Annie McDee, thirty-one, who is working as a chef for two rather sinister art dealers. Recovering from the end of a long-term relationship, she is searching in a neglected secondhand shop for a birthday present for her unsuitable new lover. Hidden behind a rubber plant on top of a file cabinet, a grimy painting catches her eye. After spending her meager savings on the picture, Annie prepares an elaborate birthday dinner for two, only to be stood up. The painting becomes hers, and as it turns out, Annie has stumbled across a lost masterpiece by one of the most important French painters of the eighteenth century. But who painted this masterpiece is not clear at first. Soon Annie finds herself pursued by interested parties who would do anything to possess her picture. For a gloomy, exiled Russian oligarch, an avaricious sheikha, a desperate auctioneer, and an unscrupulous dealer, among others, the painting embodies their greatest hopes and fears. In her search for the painting's identity, Annie will unwittingly uncover some of the darkest secrets of European history--as well as the possibility of falling in love again. Irreverent, witty, bittersweet, The Improbability of Love draws an unforgettable portrait of the London art scene, but it is also an exuberant and unexpected journey through life's highs and lows and the complexities of love and loss.

HANNAH ROTHSCHILD is the author of The Baroness: The Search for Nica, the Rebellious Rothschild. She is also a film director whose documentaries have appeared at such festivals as Telluride and Tribeca. She has written for British Vanity Fair, Vogue, The Independent, and The Spectator, and is vice president of the Hay Literary Festival, a trustee of the Tate Gallery, and the first woman chair of the National Gallery in London.
Loading...
or
Not Currently Available for Direct Purchase