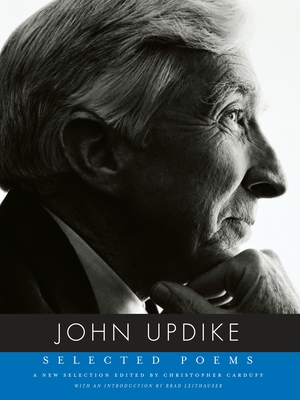 Though John Updike is widely known as one of America’s greatest writers of prose, both his first book and his last were poetry collections, and in the fifty years between he published six other volumes of verse. Now, six years after his death, Christopher Carduff has selected the best from Updike’s lifework in poetry: 129 witty and intimate poems that, when read together in the order of their composition, take on the quality of an unfolding verse-diary.

Among these poems are precocious undergraduate efforts (including the previously unpublished “Coming into New York”), frequently anthologized midcareer classics (“Seagulls,” “Seven Stanzas at Easter,” “Dog’s Death”), and dozens of later works in a form that Updike made his own, the blank-verse sonnet. The poems range from metaphysical epigrams and devotional poems to lyrical odes to rot, growth, and healing; from meditations on Roman portrait busts and the fleshy canvases of Lucian Freud to observations on sash cords, postage stamps, and hand tools; from several brief episodes in family history to a pair of long autobiographical poems, the antic and eclectic “Midpoint,” written at age thirty-five, and the elegiac masterpiece “Endpoint,” completed just before his death at seventy-six. The variety of the work is astonishing, the craftsmanship always of the highest caliber.

JOHN UPDIKE was the author of more than sixty books, eight of them collections of poetry. His novels, including The Centaur, Rabbit Is Rich, and Rabbit at Rest, won the Pulitzer Prize, the National Book Award, the National Book Critics Circle Award, and the William Dean Howells Medal of the American Academy of Arts and Letters. He died in January 2009.


CHRISTOPHER CARDUFF is a member of the staff of The Library of America and the editor of John Updike’s posthumous volumes Higher Gossip, Always Looking, and The Collected Stories. He lives in Melrose, Massachusetts.


BRAD LEITHAUSER is the author of sixteen books, the most recent of which is The Oldest Word for Dawn: New and Selected Poems. The recipient of a MacArthur Fellowship and Iceland’s Order of the Falcon, he is a professor in the Writing Seminars at Johns Hopkins University and divides his time between Baltimore, Maryland, and Amherst, Massachusetts.
Loading...
or
Not Currently Available for Direct Purchase