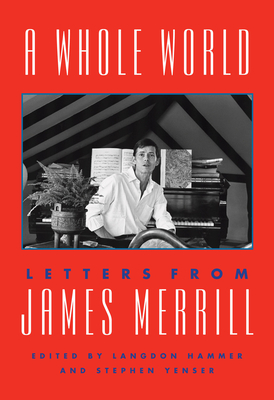 A NEW YORK TIMES NOTABLE BOOK OF THE YEAR • The selected correspondence of the brilliant poet, one of the twentieth century's last great letter writers.

"I don't keep a journal, not after the first week," James Merrill asserted in a letter while on a trip around the world. "Letters have got to bear all the burden." A vivacious correspondent, whether abroad, where avid curiosity and fond memory frequently took him, or at home, he wrote eagerly and often, to family and lifelong friends, American and Greek lovers, confidants in literature and art about everything that mattered—aesthetics, opera and painting, housekeeping and cooking, the comedy of social life, the mysteries of the Ouija board and the spirit world, and psychological and moral dilemmas—in funny, dashing, unrevised missives, composed to entertain himself as well as his recipients.

On a personal nemesis: "the ambivalence I live with. It worries me less and less. It becomes the very stuff of my art"; on a lunch for Wallace Stevens given by Blanche Knopf: "It had been decided by one and all that nothing but small talk would be allowed"; on romance in his late fifties: "I must stop acting like an orphan gobbling cookies in fear of the plate's being taken away"; on great books: "they burn us like radium, with their decisiveness, their terrible understanding of what happens."

Merrill's daily chronicle of love and loss is unfettered, self-critical, full of good gossip, and attuned to the wicked irony, the poignant detail—a natural extension of the great poet's voice.

Praise For A Whole World: Letters from James Merrill…

“A bounty of writing as exquisite and as effortlessly witty as anything Merrill produced . . . A Whole World amounts to something new and indispensable: a never-planned autobiography, assembled piecemeal, written with dozens of unwitting collaborators . . . The fullest account written ‘from the inside’ by the writer himself, showing and telling his stylistic development one letter at a time . . . Revelations abound.” —Christopher Spaide, Poetry

“Gorgeous, gossipy, revealing and welcoming letters; the epistolary Merrill is excellent company . . . Hammer and Yenser have done exemplary work in choosing the letters, annotating them with economy and tact, and providing useful, compact biographies of the major players . . . It is a mark of how well [the editors] have served the poet that one wishes the book were twice as long as it is.” —Heather Cass White, Times Literary Supplement

“A workshop and a stage for the poet’s wit . . . A cosmopolitan, bejeweled and philosophical chronicle of friendship, love, sex and work . . . [Merrill] was generous with his advice and his money, and the letters he sent, whether or not they enclosed a check, were carefully crafted presents. Their entertainment never feels like a performance for posterity, but rather something directed at the living, individual recipient, who seems to be sitting directly across from the sender . . . These letters went into the mail fully formed and polished, but this new collection of them, arriving a quarter-century into letter-writing’s death spiral, assures their monumentality.” —Thomas Mallon, The New York Times

“The art, the music, the reading in esoteric subjects, the daily life of shopping and cooking—and, most important, the friendships . . . This book, which takes us from age 6 (a letter to Santa Claus) all the way to his final days in Tucson, Ariz., where he died from AIDS-related complications in 1995, immerses us in that world and enriches our understanding of the poetry that came out of it . . . [A Whole World] shows us that the term ‘man of letters’ has never been more appropriately applied to a writer.” —Gregory Dowling, The Wall Street Journal

“I had impossibly high expectations for A Whole World. Somehow, the epistolary collection is better than I’d hoped for . . . Merrill’s correspondents comprise a Who’s Who of twentieth-century American literary culture . . . His love letters are tender and self-revealing . . . He includes flashes of critical insight and Proustian social portraiture . . . The Merrill that emerges is tactful, gracious, witty, and whole.” —Anthony Domestico, Commonweal

“Magisterial. . . The editors of the collection show a combination of scrupulous scholarship and inner-circle access. This makes for editorial annotations to the letters that are acute, comprehensive and so audience-intuitive that readers never feel lost, as we are congenially guided through the novel-like accumulation of places, incidents and personalities that comprise, as the title aptly describes it, “a whole world.” And what a world it was. . . . The takeaway from A Whole World will be its many passages of brilliant writing and the exciting entrée it gives us to the way a truly great poet thinks, feels and, above all, sees.” —Ron Maresco, America Magazine

“[An] opening up and extension of himself . . . The letters should be read for their immediate emotions: their generosity, affection, empathy, and love, their readiness to entertain, and their unfailing eagerness to please." —Dean Flower, The Hudson Review

JAMES MERRILL (1926-1995), one of the foremost American poets of the later twentieth century, was the winner of two National Book Awards, the Bollingen Prize, the Pulitzer Prize, and the first Bobbit Prize from the Library of Congress. He published eleven volumes of poems, in addition to the trilogy that makes up The Changing Light at Sandover, as well as two plays, two novels, a collection of essays and interviews, and a memoir. He was a chancellor of the Academy of American Poets and a member of the American Academy of Arts and Letters. LANGDON HAMMER is the Niel Gray Jr. Professor of English at Yale University. His books include James Merrill: Life and Art and Hart Crane and Allen Tate: Janus-Faced Modernism, and he edited the Library of America volumes of Hart Crane and May Swenson's poems. He writes about poetry for The New York Review of Books, The Yale Review, and The American Scholar, where he serves as poetry editor. STEPHEN YENSER's volumes of poems are The Fire in All Things, awarded the Walt Whitman Award by the Academy of American Poets, Blue Guide, and Stone Fruit. Distinguished Research Professor at UCLA, he has written three critical books including The Consuming Myth: The Work of James Merrill, coedited with J. D. McClatchy five volumes of Merrill's work, and annotated a stand-alone edition of Merrill's The Book of Ephraim.
Loading...
or support indie stores by buying on