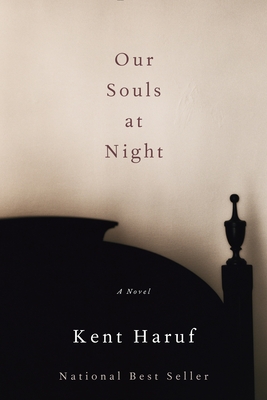 Our Souls at Night

A spare yet eloquent, bittersweet yet inspiring story of a man and a woman who, in advanced age, come together to wrestle with the events of their lives and their hopes for the imminent future.

In the familiar setting of Holt, Colorado, home to all of Kent Haruf’s inimitable fiction, Addie Moore pays an unexpected visit to a neighbor, Louis Waters. Her husband died years ago, as did his wife, and in such a small town they naturally have known of each other for decades; in fact, Addie was quite fond of Louis’s wife. His daughter lives hours away in Colorado Springs, her son even farther away in Grand Junction, and Addie and Louis have long been living alone in houses now empty of family, the nights so terribly lonely, especially with no one to talk with.

Their brave adventures—their pleasures and their difficulties—are hugely involving and truly resonant, making Our Souls at Night the perfect final installment to this beloved writer’s enduring contribution to American literature.

Praise For Our Souls at Night: A novel…

“More Winesburg that Mayberry, Holt and its residents are shaped by physical solitude and emotional reticence. . . . Haruf's fiction ratifies ordinary, nonflashy decency, but he also knows that even the most placid lives are more complicated than they appear from the outside. . . . The novel is a plainspoken, vernacular farewell.” —Catherine Holmes, The Charleston Post and Courier

“A marvelous addition to his oeuvre. . . . spare but eloquent, bittersweet yet hopeful.” —Kurt Rabin, The Fredericksburg Freelance-Star

“Lateness—and second chances—have always been a theme for Haruf. But here, in a book about love and the aftermath of grief, in his final hours, he has produced his most intense expression of that yet. . . . Packed into less than 200 pages are all the issues late life provokes.” —John Freeman, The Boston Globe

“A fitting close to a storied career, a beautiful rumination on aging, accommodation, and our need to connect. . . . As a meditation on life and forthcoming death, Haruf couldn’t have done any better. He has given us a powerful, pared-down story of two characters who refuse to go gentle into that good night.” —Lynn Rosen, The Philadelphia Enquirer

“Elegiac, mournful and compassionate. . .a triumphant end to an inspiring literary career [and] a reminder of a loss on the American cultural landscape, as well as a parting gift from a master storyteller.” —William J. Cobb, The Dallas Morning News

“A fine and poignant novel that demonstrates that our desire to love and to be loved does not dissolve with age. . . . The story speeds along, almost as if it's a page-turning mystery.” —Joseph Peschel, The St. Louis Post-Dispatch

“By turns amusing and sad, skipping-down-the-sidewalk light and pensive. . . .  I recommend reading it straight through, then sitting in quiet reflection of beautiful literary art.” —Fred Ohles, The Lincoln Journal Star

“Haruf is never sentimental, and the ending—multiple twists packed into the last twenty pages—is gritty, painful and utterly human. . . . His novels are imbued with an affection and understanding that transform the most mundane details into poetry. Like the friendly light shining from Addie's window, Haruf’s final novel is a beacon of hope; he is sorely missed.” —Francesca Wade, Financial Times

“Haruf was knows as a great writer and teacher whose work will endure. . . . The cadence of this book is soft and gentle, filled with shy emotion, as tentative as a young person's first kiss—timeless in its beauty. . . . Addie and Louis find a type of love that, as our society ages, ever more people in the baby boom generation may find is the only kind of love that matters.” —Jim Ewing, The Jackson Clarion-Ledger

“There is so much wisdom in this beautifully pared-back and gentle book. . . a small, quiet gem, written in English so plain that it sparkles.” —Anne Susskind, The Sydney Morning Herald

“His great subject was the struggle of decency against small-mindedness, and his rare gift was to make sheer decency a moving subject. . . . [This] novel runs on the dogged insistence that simple elements carry depths, and readers will find much to be grateful for.” —Joan Silber, The New York Times Book Review

“In a fitting and gorgeous end to a body of work that prizes resilience above all else, Haruf has bequeathed readers a map charting a future that is neither easy nor painless, but it’s also not something we have to bear alone.” —Esquire

“Utterly charming [and] distilled to elemental purity. . . . such a tender, carefully polished work that it seems like a blessing we had no right to expect.” —Ron Charles, The Washington Post

“Haruf spent a life making art from our blind collisions, and Our Souls at Night is a fitting finish.” —John Reimringer, The Minneapolis Star Tribune

“Haruf once again banishes doubts.  Our souls can surprise us.  Beneath the surface of reticent lives—and of Haruf’s calm prose—they prove unexpectedly brave.” —Ann Hulbert, The Atlantic

“Blunt, textured, and dryly humorous. . . this quietly elegiac novel caps a fine, late-blooming and tenacious writing career. . . . Haruf’s gift is to make hay of the unexpected, and it feels like a mercy. . . . This is a novel for just after sunset on a summer’s eve, when the sky is still light and there is much to see, if you are looking.” —Wingate Packard, The Seattle Times

“A parting gift [and] a reminder of how profoundly we will miss Holt and its people, and Kent Haruf's extraordinary writing.” —Sandra Dallas, The Denver Post

KENT HARUF is the author of five previous novels (and, with the photographer Peter Brown, West of Last Chance). His honors include a Whiting Foundation Writers’ Award, the Mountains & Plains Booksellers Award, the Wallace Stegner Award, and a special citation from the PEN/Hemingway Foundation; he was also a finalist for the National Book Award, the Los Angeles Times Book Prize, and the New Yorker Book Award. He died in November 2014, at the age of seventy-one.