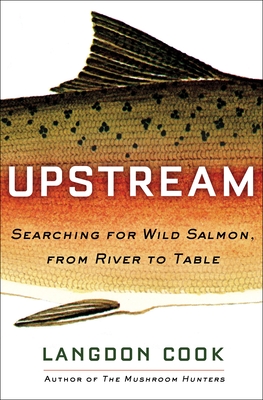 Searching for Wild Salmon, from River to Table

Finalist for the Washington State Book Award • From the award-winning author of The Mushroom Hunters comes the story of an iconic fish, perhaps the last great wild food: salmon.

For some, a salmon evokes the distant wild, thrashing in the jaws of a hungry grizzly bear on TV. For others, it’s the catch of the day on a restaurant menu, or a deep red fillet at the market. For others still, it’s the jolt of adrenaline on a successful fishing trip. Our fascination with these superlative fish is as old as humanity itself. Long a source of sustenance among native peoples, salmon is now more popular than ever. Fish hatcheries and farms serve modern appetites with a domesticated “product”—while wild runs of salmon dwindle across the globe. How has this once-abundant resource reached this point, and what can we do to safeguard wild populations for future generations?

Langdon Cook goes in search of the salmon in Upstream, his timely and in-depth look at how these beloved fish have nourished humankind through the ages and why their destiny is so closely tied to our own. Cook journeys up and down salmon country, from the glacial rivers of Alaska to the rainforests of the Pacific Northwest to California’s drought-stricken Central Valley and a wealth of places in between. Reporting from remote coastlines and busy city streets, he follows today’s commercial pipeline from fisherman’s net to corporate seafood vendor to boutique marketplace. At stake is nothing less than an ancient livelihood.

But salmon are more than food. They are game fish, wildlife spectacle, sacred totem, and inspiration—and their fate is largely in our hands. Cook introduces us to tribal fishermen handing down an age-old tradition, sport anglers seeking adventure and a renewed connection to the wild, and scientists and activists working tirelessly to restore salmon runs. In sharing their stories, Cook covers all sides of the debate: the legacy of overfishing and industrial development; the conflicts between fishermen, environmentalists, and Native Americans; the modern proliferation of fish hatcheries and farms; and the longstanding battle lines of science versus politics, wilderness versus civilization.

This firsthand account—reminiscent of the work of John McPhee and Mark Kurlansky—is filled with the keen insights and observations of the best narrative writing. Cook offers an absorbing portrait of a remarkable fish and the many obstacles it faces, while taking readers on a fast-paced fishing trip through salmon country. Upstream is an essential look at the intersection of man, food, and nature.

“Invigorating . . . Mr. Cook is a congenial and intrepid companion, happily hiking into hinterlands and snorkeling in headwaters. Along the way we learn about filleting techniques, native cooking methods and self-pollinating almond trees, and his continual curiosity ensures that the narrative unfurls gradually, like a long spey cast. . . . With a pedigree that includes Mark Kurlansky, John McPhee and Roderick Haig-Brown, Mr. Cook’s style is suitably fluent, an occasional phrase flashing like a flank in the current. . . . For all its rehearsal of the perils and vicissitudes facing Pacific salmon, Upstream remains a celebration.”—The Wall Street Journal

Langdon Cook is the author of The Mushroom Hunters: On the Trail of an Underground America, winner of the Pacific Northwest Book Award, and Fat of the Land: Adventures of a 21st Century Forager. His writing has appeared in numerous newspapers, magazines, and online journals. A nominee for the 2016 James Beard Award, Cook lives in Seattle.

Praise For Upstream: Searching for Wild Salmon, from River to Table…

“Invigorating . . . At the heart of Upstream is a journey—the oldest shape in literature. . . . In tracing the history and life cycle of these iconic creatures, Mr. Cook embarks on a series of his own journeys—fourteen nicely episodic chapters that explore how and where such fish still survive in the modern world, despite the threats of logging, dams, the diversion of running water for domestic and commercial uses, overfishing, and climate change. It is a saga that has been told before but seldom with such immediacy and panache. . . . Throughout these sorties, Mr. Cook is a congenial and intrepid companion, happily hiking into hinterlands and snorkeling in headwaters. Along the way we learn about filleting techniques, native cooking methods and self-pollinating almond trees, and his continual curiosity ensures that the narrative unfurls gradually, like a long spey cast. . . . With a pedigree that includes Mark Kurlansky, John McPhee and Roderick Haig-Brown, Mr. Cook’s style is suitably fluent, an occasional phrase flashing like a flank in the current. . . . For all its rehearsal of the perils and vicissitudes facing Pacific salmon, Upstream remains a celebration.”—The Wall Street Journal

“Upstream is first-rate literary journalism, a deep dive into surprisingly disparate milieus united by a passion for the king of fish. Cook pivots easily from place to place, and aficionado to aficionado. The characters he renders are both salty and refined, and the connections between fishers, farmers and conservationists are drawn taut, with real tension at times. Upstream is also a classic commodity narrative, à la John McPhee’s Oranges. We learn how Pacific salmon ultimately migrate to a fine restaurant or home kitchen, and we even learn the secret to preparing them.”—High Country News

“It’s flat-out a really good read. . . . Cook is a natural storyteller. He fuses introspection, science, a dab of wry humor, a professional chef’s nutritional and food preparation sensibilities, a rigorous historical perspective and the writing chops of John McPhee into a tasty blend of wordplay that leaves you turning the pages well past your bedtime.”—Trout Unlimited

“Cook deftly conveys his love of nature, the beauty of the Pacific Northwest, and the delectable eating provided by fresh caught wild salmon. . . . Fishers, environmentalists, naturalists, and armchair travelers will enjoy this passionate and well-written account.”—Library Journal

“Cook tackles a Pacific Northwest icon in this wide-ranging exploration of the region’s most famous fish. From the opening pages, bearing witness to shoppers at Pike Place Market and considering the outrageous marketing success of the annual Copper River salmon season, Cook proves himself equally at home fishing in the wildest of rivers and chatting with salesmen and chefs. . . . Cook’s salmon travelogue easily appeals to anglers, salmon eaters, nature lovers, and everyone in between. The Pacific salmon is a great American fish, and by writing about it with such care and curiosity, Cook establishes its ecological importance and tells a great American story.”—Booklist

“In this insightful book, Cook clearly outlines scientific information about the species of fish commonly known as salmon. . . . But the focus here is less on facts and research and more on how ‘Pacific salmon culture in North America is a dance between fish and humanity.’ . . . For those who want to . . . see the salmon recapture its former glory, this work is a great place to learn what needs to done—and an entertaining view on the positive and negative connections humans have with the natural environment.”—Publishers Weekly

“Exposing striking human-salmon parallels, these stories tell of settlement and cultural clashes, of life cycles and migrations, of deforestation and industrial agriculture, of racism and gentrification, and [Langdon] Cook skillfully illustrates the interconnectedness of it all. Seeking the wild in a landscape fraught with man-made alteration and annihilation, the author interrogates the nature of wildness, posing urgent, provocative questions. . . . Blurring boundaries and complicating the oversimplified, Cook provides a moving, artfully layered story of strength and vulnerability, offering glimpses of hope for growing humility and reverence and for shifting human-nature relationships.”—Kirkus Reviews
or
Buy Here
Copyright © 2020 American Booksellers Association