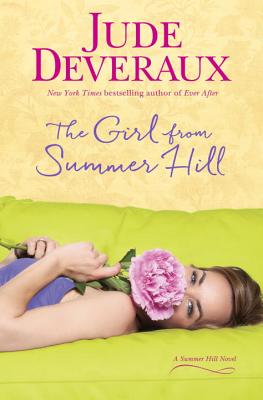 The Girl from Summer Hill

The first novel of New York Times bestselling author Jude Deveraux's breathtaking new series set in Summer Hill, a small town where love takes center stage against the backdrop of Jane Austen's Pride and Prejudice Enter Elizabeth Bennet. Chef Casey Reddick has had it up to here with men. When she arrives in the charming town of Summer Hill, Virginia, she leaves behind a demanding boss at a famous D.C. restaurant and a breakup with a boyfriend jealous of her success. Some peace and quiet on the picturesque Tattwell plantation is just what she needs to start fresh. But the tranquility is broken one misty morning when she sees a gorgeous naked man on the porch of her cottage.

Enter Mr. Darcy. What Tate Landers, Hollywood heartthrob and owner of Tattwell, doesn't need on a bittersweet trip to his ancestral home is a woman spying on him from his guest cottage. Mistaking Casey for a reporter, Tate tries to run her out of her own house. His anger, which looks so good on the screen, makes a very bad first impression on Casey. Hollywood he may be, but he's no sweetheart to Casey--and she lets him know it

The plot thickens. Sparks fly--literally--when Casey is recruited to play Elizabeth Bennet opposite Tate's Mr. Darcy in a stage adaptation of Pride and Prejudice. Just brushing past Tate makes Casey's whole body hum. As they spar on and off stage, Casey begins to think she's been too quick to judge. Tate is more down-to-earth than Casey expected, and she finds herself melting under his smoldering gaze. But then Tate's handsome ex-brother-in-law, Devlin Haines, who is playing Wickham, tells Casey some horrifying stories about Tate. She is upset and confused as she tries to figure out who and what to believe. As she finds herself falling for Tate, Casey needs to know: Is the intense, undeniable chemistry between them real, or is this just a performance that ends when the curtain falls? Praise for The Girl from Summer Hill

"Kicking off a new series set in Summer Hill, Virginia, the New York Times bestselling author brings Jane Austen's Pride and Prejudice to the theater--and into the twenty-first century. . . . A steamy and delightfully outlandish retelling of a literary classic."--Kirkus Reviews

" An] enjoyable start to a new trilogy . . . This book will delight fans of Austen and Deveraux alike."--Publishers Weekly

"Deveraux kicks off her new small-town Summer Hill romance trilogy and treats readers to an irresistibly delicious tale of love, passion, and the unknown."--Booklist

"This brand-new series from Deveraux is off to a fantastic start Set as a modern-day Pride and Prejudice, the formulaic story is a classic for a reason. Casey is a lovable Elizabeth Bennet and Tate is a quintessential Mr. Darcy, naturally making them a couple with chemistry readers will enjoy until the very end."--RT Book Reviews

"Will The Girl from Summer Hill knock Pride and Prejudice off its throne? Of course not--that's a classic for a reason. But conscripting Austen's plot doesn't take away from the clever and well-executed hook on which Deveraux hangs an engaging, page-turning story."--BookPage Praise for Jude Deveraux

Jude Deveraux is the author of forty-three New York Times bestsellers, including Ever After, For All Time, Moonlight in the Morning, and A Knight in Shining Armor. She was honored with a Romantic Times Pioneer Award in 2013 for her distinguished career. To date, there are more than sixty million copies of her books in print worldwide.
Loading...
or
Not Currently Available for Direct Purchase