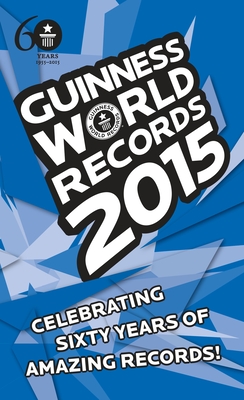 Celebrate sixty years of jaw-dropping records. From the oldest person who ever lived (at 122) to the first music video filmed in space, from the tallest self-built castle to the fastest blindfolded text message—the most amazing feats from around the world can be found in this special diamond anniversary edition.

Guinness World Records 2015 presents the most astonishing and exciting record breakers ever. Filled with don’t-try-this-at-home human exploits, natural and technological wonders, incredible achievements in sports and entertainment, and much more, this fully updated edition introduces thrilling new records and extraordinary facts that will fascinate young and old alike. Did you know that . . .

• On December 8, 2013, Metallica became the first music act to have performed on all seven continents when they played their “Freeze ’Em All” show for a crowd of 120 at Antarctica’s Carlini Station?
• Researchers at the Joint Institute for Laboratory Astrophysics have created the most accurate clock ever, which will keep time to the second for 4.5 billion years?
• The New Jersey Zombie Walk of Asbury Park recaptured its title—from the Zombie Pub Crawl of Minneapolis—as the biggest undead get-together, with a mind-blowing 9,592 participants?

And that’s just a taste of what you’ll find inside this absorbing book. The world has changed a lot in the last sixty years—for proof, check out the biggest crowdfunding successes or the largest gathering of people twerking. One thing remains the same: Nobody does records like Guinness World Records.