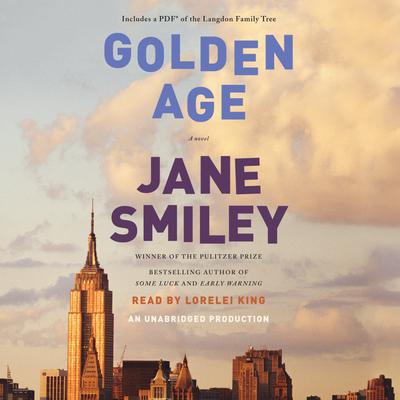 From the winner of the Pulitzer Prize: the much-anticipated final volume, following Some Luck and Early Warning, of her acclaimed American trilogy—a richly absorbing new novel that brings the remarkable Langdon family into our present times and beyond

A lot can happen in one hundred years, as Jane Smiley shows to dazzling effect in her Last Hundred Years trilogy. But as Golden Age, its final installment, opens in 1987, the next generation of Langdons face economic, social, political—and personal—challenges unlike anything their ancestors have encountered before.

Michael and Richie, the rivalrous twin sons of World War II hero Frank, work in the high-stakes world of government and finance in Washington and New York, but they soon realize that one’s fiercest enemies can be closest to home; Charlie, the charming, recently found scion, struggles with whether he wishes to make a mark on the world; and Guthrie, once poised to take over the Langdons’ Iowa farm, is instead deployed to Iraq, leaving the land—ever the heart of this compelling saga—in the capable hands of his younger sister.

Determined to evade disaster, for the planet and her family, Felicity worries that the farm’s once-bountiful soil may be permanently imperiled, by more than the extremes of climate change. And as they enter deeper into the twenty-first century, all the Langdon women—wives, mothers, daughters—find themselves charged with carrying their storied past into an uncertain future.

Combining intimate drama, emotional suspense, and a full command of history, Golden Age brings to a magnificent conclusion the century-spanning portrait of this unforgettable family—and the dynamic times in which they’ve loved, lived, and died: a crowning literary achievement from a beloved master of American storytelling.

JANE SMILEY is the author of numerous novels, including A Thousand Acres, which was awarded the Pulitzer Prize, and most recently, Some Luck and Early Warning, the first volumes of The Last Hundred Years trilogy. She is also the author of five works of nonfiction and a series of books for young adults. A member of the American Academy of Arts and Letters, she has also received the PEN USA Lifetime Achievement Award for Literature.