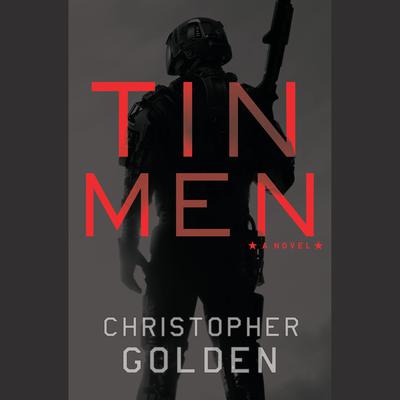 Brad Thor meets Avatar in this timely thriller for the drone age as award-winning author Christopher Golden spins the troubles of today into the apocalypse of tomorrow.

After political upheaval, economic collapse, and environmental disaster, the world has become a hotspot, boiling over into chaos of near apocalyptic proportions. In this perpetual state of emergency, all that separates order from anarchy is the military might of a United States determined to keep peace among nations waging a free-for-all battle for survival and supremacy.

But a conflict unlike any before demands an equally unprecedented fighting force on its front lines. Enter the Remote Infantry Corps: robot soldiers deployed in war zones around the world, controlled by human operators thousands of miles from the action. PFC Danny Kelso is one of these “Tin Men,” stationed with his fellow platoon members at a subterranean base in Germany, steering their cybernetic avatars through combat in the civil-war-ravaged streets of Syria. Immune to injury and death, this brave new breed of American warrior has a battlefield edge that’s all but unstoppable—until a flesh-and-blood enemy targets the Tin Men’s high-tech advantage in a dangerously game-changing counter strike.

When anarchists unleash a massive electromagnetic pulse, short-circuiting the world’s technology, Kelso and his comrades-in-arms find themselves trapped—their minds tethered within their robot bodies and, for the first time, their lives at risk.

Now, with rocket-wielding “Bot Killers” gunning for them, and desperate members of the unit threatening to go rogue, it’s the worst possible time for the Tin Men to face their most crucial mission. But an economic summit is under terrorist attack, the U.S. president is running for his life, and the men and women of the 1st Remote Infantry Division must take the fight to the next level—if they want to be the last combatants standing, not the first of their kind to fall forever.

“Tin Men is the literary equivalent of a muscle car: stylish and fast-paced, with a hopped-up engine of a plot. Christopher Golden starts things off at tire-burning speed and never lets up. It’s a great ride—definitely as much fun as we can ever hope to have while the world falls to ruin around us.”—Scott Smith, author of A Simple Plan and The Ruins

“A chilling tale of a world that could be, Tin Men is a vicious beast—Starship Troopers meets Generation Kill—that left my nerves fried and my brain craving another fix.”—Pierce Brown, author of Golden Son

“When the human soul thrums inside machines of war, the ultimate weapon is born. Golden crafts a unique combination of Terminator and Saving Private Ryan.”—Scott Sigler, author of Alive

“As military robots proliferate, we have all wondered whether the wealthy will use them to dominate those with fewer resources. Fascinating and thrilling, Tin Men imagines a future in which the playing field is suddenly and violently leveled. When the stakes are life or death, will the soldiers behind the robots still have what it takes to survive?”—Daniel H. Wilson, author of Robopocalypse

“This evocative tale of the possible and the probable takes a wild walk on the perilous side. Along the way, we get a top-of-the-line lesson in what may actually be in store for us one day. You’re going to love this thrilling, taut drama.”—Steve Berry, author of The Lincoln Myth

Christopher Golden’s novels include The Lost Ones, The Myth Hunters, Wildwood Road, The Boys are Back in Town, The Ferryman, Strangewood, Of Saints and Shadows, and The Borderkind. Golden co-wrote the lavishly illustrated novel Baltimore, or, The Steadfast The Steadfast Tin Soldier and The Vampire, with Mike Mignola, and they are currently scripting it as a feature film for the New Regency. He has also written books for teens and young adults, including the thriller series Body of Evidence, honored by the New York Public Library and chosen as one of YALSA’s Best Books for Young Readers. Upcoming teen novels include Poison Ink for Delacorte, Soulless for MTV Books, and The Secret Journeys of Jack London, a collaboration with Tim Lebbon. With Thomas E. Sniegoski, he is the co-author of the dark fantasy series The Menagerie as well as the young readers fantasy series OutCast and the comic book miniseries Talent, both of which were recently acquired by Universal Pictures. Golden and Sniegoski also wrote the upcoming comic book miniseries The Sisterhood, currently in development as a feature film. Golden was born and raised in Massachusetts, where he still lives with his family. At present he is collaborating with Tim Lebbon on The Map of Moments, the second novel of The Hidden Cities