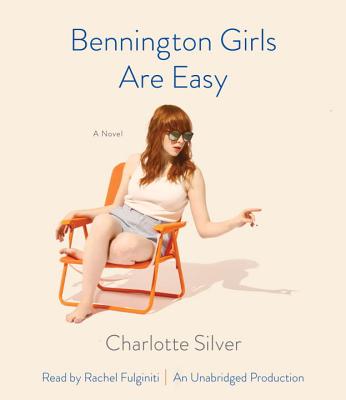 Chosen as one of "Summer's Best Books" by PEOPLE MAGAZINE: "Suprisingly insightful and seriously fun."

One of O MAGAZINE's "Season's Best"

Charlotte Silver dazzles with a ruefully funny coming-of-age novel that follows two recent Bennington grads who are determined to make it in the Big Apple.

Bennington College, founded in 1932 as a suitable refuge for the wayward daughters of good families, maintains its saucy reputation for attracting free spirits. There, acres outnumber students, the faculty is composed of fading hippie and clothing is largely optional. Or, as J. D. Salinger put it in Franny and Zooey: a Bennington-type "looked like she'd spent the whole train ride in the john, sculpting or painting or something, or as though she had a leotard on under her dress."
Cassandra Puffin and Sylvie Furst met in high school but cement what they ardently believe will be everlasting friendship on Bennington's idyllic Vermont campus. Graduation sees Sylvie moving to New York City, where, later on their twenties, Cassandra joins her. These early, delirious years are spent decorating their Fort Greene apartment with flea market gems, dating "artists", and trying to figure out what they're doing with their lives.
The girls are acutely and caustically observant of the unique rhythms of the city but tone deaf to their own imperfections, which eventually drives a wedge between them. Equal parts heartfelt and hilarious, Bennington Girls Are Easy is a novel about female friendships—how with one word from a confidante can lift you up or tear you down—and how difficult it is to balance someone else's devastatingly funny lapses in judgment with your own professional and personal missteps.

Praise For Bennington Girls Are Easy: A Novel…

Chosen as one of "Summer's Best Books" by People Magazine: "Suprisingly insightful and seriously fun."

One of  O Magazine "Season's Best" Books:  “Like some of the well-to-do gals in Mary McCarthy’s The Group, the heroines of this delightful satire move to New York City expecting the city to enfold them like the arms of so many Amherst boys. But as they swiftly learn, reality is as unforgiving of youth as it is of missed rent, and eventually it’s time to grow up.”

"Silver’s snarky, superb look at female friendship focuses on two Bennington College classmates, Cassandra and Sylvie. After they move to New York City together to begin the artsy adult lives they’ve envisioned, the limits of their bond are tested."
-- Entertainment Weekly

"[C]lever and ultimately wise... indomitable and savvy and full of moxie that’s hard not to enjoy... [The novel] outlines the rules of girlhood and young adulthood the way a storyteller might declare the rules that govern a foreign kingdom...sparkle[s] with the spirit of a Frank O'Hara poem."
-- Slate

"Silver's voice brings an emotional complexity to the material."
-- The Village Voice

"[This book] will make you think about how friendship can sometimes feel a lot like romantic love... It will also make you laugh, cringe and possibly cry as you remember the sins and redemptions of your own misspent youth.... Languid but still attention-grabbing, Bennington Girls Are Easy is the perfect book for a summer afternoon at the cottage. Even better if you have friends around to read the best lines aloud to."
-- The Globe and Mail

“Charlotte Silver enjoys her characters’ silliness, appreciates their courage, evokes their looks, their clothes, their food and their often Herculean efforts to get where they want to go… [A] satirist who is often happy to laugh at and with her characters rather than skewer them…Readers will find a lot to laugh at too…[C]hick-lit with a steel core and something fairly serious to say about friendship, college education, first jobs in today’s world, and sex and the single girl.”
-- Washington Times

“[Silver] introduces us to an endless parade of similar characters, amusing and infuriating in equal measure, as Cassandra and Sylvie take Manhattan…[and] spins off some terrific turns of phrase.
-- The Boston Globe

“It's not that these privileged women, groomed on Bennington's leafy New England campus, have everything; it's that they expect it, and their plummet to earth takes turns both devastating and delightful…What John Updike did for the minutiae of men's lives--brand names, domesticity and office trivia--Silver does for the Bennington graduates she follows…”
-- Shelf Awareness

“A droll, comedic tone and an introspective look into female friendships….Silver’s clever title may suggest that Sylvie and Cassandra move to the city and immediately begin a life of meaningless sexual encounters and banal conversations, a la ‘Sex and the City.’ But this is not the case… the real meat of the book is their crumbling friendship and complete lack of moral compasses… Speaks volumes to Silver’s ability to create strong, affecting characters.”
-- Book Report Network

"Smart writers understand that sometimes the best way to go anthropological is to focus on that moment of transition. Silver expertly captures a moment in time when graduates of elite school Bennington, brilliantly educated but peculiarly sheltered from life, ran smack into the economic downturn of the last decade...Silver’s rich recent grads fumble through sex and intense self-love affairs that ultimately doom friendships and end romances, giving the rest of us a glimpse at a very specific subculture in scientific (and amusing) detail."
-- Barnes & Noble Review

"This is such a delightful, affectionate satire of a best friendship gone awry. Charlotte Silver has a sharp eye for the deeply goofy consumption patterns of the young bourgeois bohemian (yes to artisanal lemonade; no to Trader Joe's frozen hors d'oeuvres), and for the ill-advised love affairs they pursue. This book is honest, caustic and a lot of fun."
--Jessica Grose, author of Sad Desk Salad and The Closest Marriage

“In Bennington Girls Are Easy, Charlotte Silver frames the plight of 20-somethings trying to survive in New York with such a witty, poetic eye, petty arguments frequently take asurprisingly profound turn in this juicy novel.”
--Suzanne Rindell, author of The Other Typist

"In this wickedly comic, deliciously mischievous and purely pleasurable novel, Charlotte Silver has found the perfect distance and tone, enabling her to mock youth's presumptions, vanities and self-delusions while maintaining overall fondness for her characters.  The contemporaneous details are spot-on, the aphoristic wit shrewd and universal.  These Bennington girls' follies are recognizably our own."
-- Phillip Lopate, author of Portrait Inside My Head and Getting Personal

“Bennington Girls Are Easy is a devastatingly witty Sex in the City, circa 2010, revolving around a groupof Bennington girls as they become women of the world. But in this world, the economy sucks, jobs and affordable apartments are scarce, real men are scarcer, and best friends are friends forever, until trouble drives them apart. Charlotte Silver gets the secret language of female friendship just right, and the heartbreak of broken engagements and love gone bad, while she skewers so many cultural shrines: the  farmer's markets of artisanal Brooklyn, dates at the Harvard Club, older men and the young women who sleep with them. I kept thinking that Muriel Spark would love this book, and Dorothy Parker, too."
-- Elizabeth Benedict author of the novels Almost and The Practice of Deceit; editor of What My Mother Gave Me: Thirty-one Women on the Gifts That Mattered Most

"A good bet for millenials and watchers of HBO's Girls."
--Booklist

[Charlotte] Silver presents a clever view of the emotional development of two entitled young women as they progress from a cruel cynicism to recanting their outlooks and understanding more about adult life.
-- Library Journal

A graduate of Bennington College, CHARLOTTE SILVER is the author of Charlotte au Chocolat: Memories of a Restaurant Girlhood, and the YA novel, The Summer Invitation.