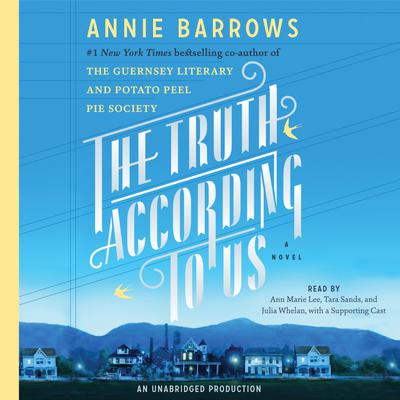 The Truth According to Us (Digital Audiobook)

“In 1938, as America is in the throes of the Depression, Layla Beck, daughter of a senator, is sent to Macedonia, West Virginia, to write a history of the town under the auspices of the Writers' Project of America. She boards with the unconventional Romeyn family, whose many members live under one roof. Willa, who is 12 years old and the inner voice of this intriguing story, will remind readers of Scout in To Kill a Mockingbird with her bravado and curiosity. As Macedonia's history is written in an upstairs room, downstairs the family's long-held secrets begin to unravel, and eventually each person has to take responsibility for events long kept under wraps. A compelling page-turner!”
— Susan Diffenderfer, Tall Tales Book Shop, Atlanta, GA
View the List

From the co-author of The Guernsey Literary and Potato Peel Pie Society comes a wise, witty, and exuberant novel, perfect for fans of Lee Smith, that illuminates the power of loyalty and forgiveness, memory and truth, and the courage it takes to do what’s right.

Annie Barrows once again evokes the charm and eccentricity of a small town filled with extraordinary characters. Her new novel, The Truth According to Us, brings to life an inquisitive young girl, her beloved aunt, and the alluring visitor who changes the course of their destiny forever.

In the summer of 1938, Layla Beck’s father, a United States senator, cuts off her allowance and demands that she find employment on the Federal Writers’ Project, a New Deal jobs program. Within days, Layla finds herself far from her accustomed social whirl, assigned to cover the history of the remote mill town of Macedonia, West Virginia, and destined, in her opinion, to go completely mad with boredom. But once she secures a room in the home of the unconventional Romeyn family, she is drawn into their complex world and soon discovers that the truth of the town is entangled in the thorny past of the Romeyn dynasty.

At the Romeyn house, twelve-year-old Willa is desperate to learn everything in her quest to acquire her favorite virtues of ferocity and devotion—a search that leads her into a thicket of mysteries, including the questionable business that occupies her charismatic father and the reason her adored aunt Jottie remains unmarried. Layla’s arrival strikes a match to the family veneer, bringing to light buried secrets that will tell a new tale about the Romeyns. As Willa peels back the layers of her family’s past, and Layla delves deeper into town legend, everyone involved is transformed—and their personal histories completely rewritten.

Praise for The Guernsey Literary and Potato Peel Pie Society

“A jewel . . . poignant and keenly observed . . . a small masterpiece about love, war, and the immeasurable sustenance to be found in good books and good friends.”—People

“This is a book for firesides or long train rides. It’s as charming and timeless as the novels for which its characters profess their love.”—San Francisco Chronicle

“A book-lover’s delight, an implicit and sometimes explicit paean to all things literary.”—Chicago Sun-Times

“A poignant, funny novel that celebrates the resilience of the human spirit . . . This one is a treat.”—The Boston Globe

“Smart and delightful . . . Treat yourself to this book, please—I can’t recommend it highly enough.”—Elizabeth Gilbert, author of Eat, Pray, Love and The Signature of All Things

Annie Barrows is the co-author, with her aunt Mary Ann Shaffer, of The Guernsey Literary and Potato Peel Pie Society, a runaway New York Times bestseller that was named one of the ten best books of the year by Time and USA Today. She is also the author of the children’s series Ivy and Bean as well as The Magic Half and its sequel, Magic in the Mix. She lives in Berkeley, California.