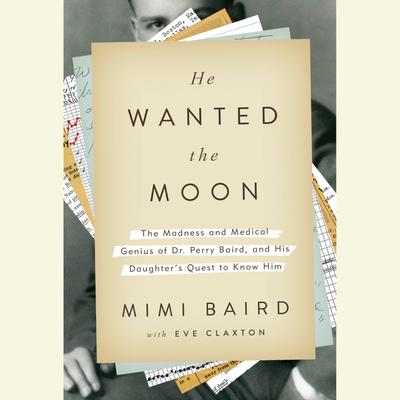 He Wanted the Moon (Digital Audiobook)

Soon to be a major motion picture, from Brad Pitt and Tony Kushner

A mid-century doctor's raw, unvarnished account of his own descent into madness, and his daughter's attempt to piece his life back together and make sense of her own.

Texas-born and Harvard-educated, Dr. Perry Baird was a rising medical star in the late 1920s and 1930s. Early in his career, ahead of his time, he grew fascinated with identifying the biochemical root of manic depression, just as he began to suffer from it himself. By the time the results of his groundbreaking experiments were published, Dr. Baird had been institutionalized multiple times, his medical license revoked, and his wife and daughters estranged. He later received a lobotomy and died from a consequent seizure, his research incomplete, his achievements unrecognized.
Mimi Baird grew up never fully knowing this story, as her family went silent about the father who had been absent for most of her childhood. Decades later, a string of extraordinary coincidences led to the recovery of a manuscript which Dr. Baird had worked on throughout his brutal institutionalization, confinement, and escape. This remarkable document, reflecting periods of both manic exhilaration and clear-headed health, presents a startling portrait of a man who was a uniquely astute observer of his own condition, struggling with a disease for which there was no cure, racing against time to unlock the key to treatment before his illness became impossible to manage.
Fifty years after being told her father would forever be “ill” and “away,” Mimi Baird set off on a quest to piece together the memoir and the man. In time her fingers became stained with the lead of the pencil he had used to write his manuscript, as she devoted herself to understanding who he was, why he disappeared, and what legacy she had inherited. The result of his extraordinary record and her journey to bring his name to light is He Wanted the Moon, an unforgettable testament to the reaches of the mind and the redeeming power of a determined heart.

Mimi Baird, a Bostonian, is a graduate of Colby Sawyer College.  After working at the Harvard Graduate School of Education, she later moved to Woodstock, Vermont, where she worked as an office manager at the Dartmouth Hitchcock Medical Center. There she met a surgeon who had once known her father, a meeting that prompted her quest to finally understand her father’s life and legacy.  Mimi has two children and four grandchildren.  This is her first book.

Eve Claxton was born in London. She has been instrumental in creating six works of non-fiction as a co-writer or ghostwriter, and is the editor of The Book of Life, an anthology of memoir. She also works with StoryCorps, the National Oral History Project featured on NPR. Eve lives with her husband and three children in Brooklyn.