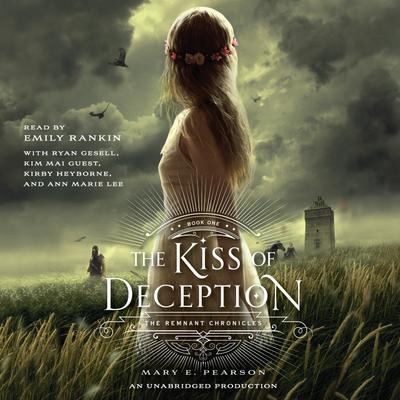 The Kiss of Deception (The Remnant Chronicles) (Digital Audiobook)

In a society steeped in tradition, Princess Lia’s life follows a preordained course. As First Daughter, she is expected to have the revered gift of sight—but she doesn’t—and she knows her parents are perpetrating a sham when they arrange her marriage to secure an alliance with a neighboring kingdom—to a prince she has never met.

On the morning of her wedding, Lia flees to a distant village. She settles into a new life, hopeful when two mysterious and handsome strangers arrive—and unaware that one is the jilted prince and the other an assassin sent to kill her. Deception abounds, and Lia finds herself on the brink of unlocking perilous secrets—even as she finds herself falling in love.

The Kiss of Deception is the first audiobook in Mary E. Pearson's Remnant Chronicles

Mary E. Pearson is the author of several award-winning books for teens, including the bestselling Jenna Fox Chronicles. She is a native Southern Californian and writes full-time from her home in Carlsbad, California, where she lives with her family.

Her awards and honors include the Golden Kite Award, ALA Best Books for Young Adults, the Andre Norton Honor, and The South Carolina Young Adult Book Award.

Her newest series, The Remnant Chronicles, kicks off with THE KISS OF DECEPTION, the first in a trilogy about a defiant princess living in the ruins of a bygone world.