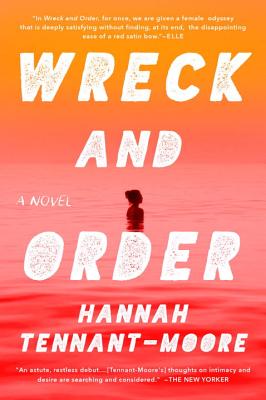 A boldly candid, raw portrait of a young woman's search for meaning and purpose in an indifferent world

Purposefully aimless, self-destructive, and impulsively in and out of love, Elsie is a young woman who feels lost. She's in a tumultuous relationship, is stuck in a dead-end job, and has a relentless, sharp intelligence that’s at odds with her many bad decisions. When her initial attempts to improve her life go awry, Elsie decides that a dramatic change is the only solution.

While traveling through Paris and Sri Lanka, Elsie meets people who challenge and provoke her towards the change she is seeking, but ultimately she must still come face-to-face with herself.

Whole-hearted, fiercely honest and inexorably human, Wreck and Order is a stirring debut novel that, in mirroring one young woman's dizzying quest for answers, illuminates the important questions that drive us all.

Praise For Wreck and Order: A Novel…

"[An] astute, restless début...The novel glows with the malaise of the Bush years...Although Elsie makes rash decisions, her thoughts about intimacy and desire are searching and considered, and Tennant-Moore depicts even her most startling fantasies with analytical froideur."--The New Yorker

“[Tennant-Moore] has managed to do a difficult thing: write frankly about female desire, and unfussily capture the emotional and visceral confusion of pleasure being contingent upon another human…In Wreck and Order, for once, we are given a female odyssey that is deeply satisfying without finding, at its end, the disappointing ease of a red satin bow.”—Elle

"Sex, spirituality, wanting the wrong things, why people are like that — there's so much in Hannah Tennant-Moore's acutely observed debut that'll make you feel like someone gets it.”—Bustle.com

"Many readers will see something of their own inner churning in this first novel."—Flavorwire.com

"[A] boundary-pushing debut novel, which finds its somewhat self-destructive heroine on a journey that could be read as the darker side of Eat, Pray, Love. As Elsie travels through Paris and Sri Lanka, her struggle to figure out her path in life is portrayed in starkly honest and frank prose."—Bookpage

"Strong and vulnerable, wise and reckless, a young woman made happy by the right and wrong things—Elsie Shore takes self-discovery to a new level in this very smart, highly quotable novel.  'I was there to lose control, to be surprised by another person'; she is all nerve and courage, from California to Sri Lanka, with a dangerous flaw—when men hurt her she returns to the source of pain for relief from the pain.  I alternately feared for and applauded the darkly funny young woman at the center of this stunning debut."—Amy Hempel

"Hannah Tennant-Moore has created an unforgettable character: a deeply sensitive millennial who has internalized the culture's tendencies to objectify and degrade the female body, even as she's intellectually embattled against those very same tendencies. She's a new kind of feminist; she tallies orgasms received and given with the scrupulous attention and fury second wave feminists devoted to the counting of dishes washed, beds made and meals cooked. Her wisdom awakens in Sri Lanka, in a cross-cultural friendship she develops with a traditional young woman. A fearless, far ranging exploration of a contemporary young woman's sexuality and ambition, which covers continents, includes even a proper engagement and questions the nature of happiness and endings."—Mona Simpson

"Elsie, the protagonist of WRECK AND ORDER, is simultaneously in search of and in flight from her nature – sexually, spiritually, and emotionally. In this raw and compelling debut, Hannah Tennant-Moore has created a woman savagely at odds with herself: a heroine who’s anything but, for these strange times."—Claire Messud

“'After Abu Ghraib and Bagram and Guantanamo, I knew what I would do. Feel rage, shame, disgust, loneliness, helplessness, sorrow, despair, great and debilitating hatred for everyone who did not also feel these things.' This is the heterodox and unnerving but touching narrator of Wreck and Order. Read this carnal picaresque novel for – its daring, its passages of unsparing self-interrogation, its sharp rendering of locale and lives in Sri Lanka. Not every kink in this young woman’s quest is made straight by the time you reach the end, but that’s the way you want it to be when you get there."—Norman Rush, National Book Award winning author of Mating and Subtle Bodies

“Wreck and Order is suffused with an essential intelligence that makes even the most challenging of journeys sing.”—Rivka Galchen

"In Tennant-Moore's sharp, confident debut novel, Elsie, a bright young woman in her 20s who is equal parts self-assured and self-destructive, isn't afraid to name her feelings: "lust, rage, lust, rage"...Sophisticated and nuanced...Tennant-Moore provides no easy answers, deftly illustrating Elsie's inner monologue as she tries to face up to herself and the people around her. The book has a broad appeal, and many young women will keep it stacked on their bookshelf...and cart it with them like a talisman."—Publishers Weekly (starred review)

"[A] sharp debut...With bracing insight, Tennant-Moore captures not only Elsie's inner life, but also her physical existence; the novel stands out not only for its emotional precision, but for its incredible attention to the visceral realities of having a body. Often unsettling, sometimes funny, always meticulously observed; a quietly intoxicating novel that resists easy answers."—Kirkus

Hannah Tennant-Moore's work has appeared in the New York Times, The New Republic, n+1, Tin House, Salon, The Los Angeles Review of Books, and has twice been included in Best Buddhist Writing. She lives in the Hudson Valley.
Loading...
or
Not Currently Available for Direct Purchase