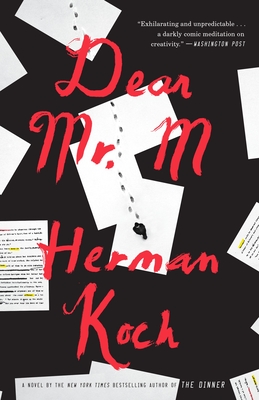 The tour-de-force, hair-raising new novel from Herman Koch, the New York Times bestselling author of The Dinner and Summer House with Swimming Pool

Once a celebrated writer, M had his greatest success with a suspense novel based on a real-life disappearance. It told the story of a history teacher who went missing one winter after having a brief affair with a beautiful student of his. The teacher was never found. Upon publication, M's novel was a runaway bestseller, one that marked his international breakthrough.

That was years ago, and now M's career is fading. But not when it comes to his bizarre, seemingly timid neighbor who keeps a close eye on him and his wife. Why?

From alternating points of view, where no one is to be trusted, Herman Koch weaves together an intricate tale of a writer in decline, a teenage couple in love, a missing teacher, and a single book that entwines all of their fates. Thanks to M's novel, supposedly a work of fiction, everyone seems to be linked forever, until something unexpected spins the "story" off its rails.

With ever increasing tension, his signature sardonic wit and world-renowned sharp eye for human failings, Herman Koch once again spares nothing and no one in his gripping new novel, a barbed performance that suspends readers in the mysterious space between fact and fiction.

HERMAN KOCH is the author of eight novels and three collections of short stories. The Dinner, his sixth novel, has been published in forty languages and was an international bestseller. He currently lives in Amsterdam.

“An exhilarating and unpredictable novel…[it] opens before us like a set of nesting dolls, each narrative turn revealing another… We see the territory ‘Dear Mr. M’ occupies, the middle ground between literature and life, intent and open-endedness, making the book a darkly comic meditation on creativity and the limits of creativity, on the art of fiction and its discontents.”—David Ulin, The Washington Post

“Perfect for fans of Koch’s previous best sellers, The Dinner and Summer House with Swimming Pool, and of the sociopathic story line in fiction.”—Library Journal (starred review)

“A book-within-a-book about strange neighbors, missing persons, young lovers, and the brilliant writer who brings them all together — yeah, sometimes you can barely trust the words you’re reading! But that’s what makes Dear Mr. M so gripping, slippery, and smart.”—Buzzfeed, “37 Books With Plot Twists That Will Blow Your Mind”

“[a] totally engrossing blend of thriller and literary fiction will take you into that Twilight Zone ‘middle ground between light and shadow’ and hold you there for awhile afterward… It requires your complete attention, but when you give it, you will be absorbed by the clever prose…Dear Mr. M is bound to find a strong audience, especially among fans of Lionel Shriver and Megan Abbott.”—Booklist

“Koch cleverly lays out the pieces of his puzzle, letting first one pattern and then another emerge, and leaving the final piece in reserve until the last few pages. His sardonic sense of humor and dark perspective on human failings give the novel a greater, more satisfying depth than the usual thriller.”—Publishers Weekly

“With a classic whodunit as its spine, the novel is elevated by Koch’s elegant handling of structure, willingness to cross-examine the Dutch liberal sensibility, and skewering of the writer’s life. This is a page turner with a smart head on its shoulders and a mouth that’s willing to ask uncomfortable questions.”—The Millions
or
Buy Here
Copyright © 2020 American Booksellers Association