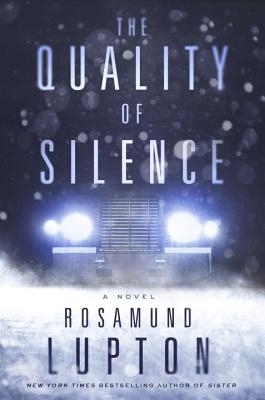 The Quality of Silence

The gripping, moving story of a mother and daughter's quest to uncover a dark secret in the Alaskan wilderness, from the New York Times bestselling author of Sister and Afterwards. Thrillingly suspenseful and atmospheric, The Quality of Silence is the story of Yasmin, a beautiful astrophysicist, and her precocious deaf daughter, Ruby, who arrive in a remote part of Alaska to be told that Ruby's father, Matt, has been the victim of a catastrophic accident. Unable to accept his death as truth, Yasmin and Ruby set out into the hostile winter of the Alaskan tundra in search of answers. But as a storm closes in, Yasmin realizes that a very human danger may be keeping pace with them. And with no one else on the road to help, they must keep moving, alone and terrified, through an endless Alaskan night.

Rosamund Lupton is the internationally bestselling and critically acclaimed author of the novels Sister and Afterwards. Her New York Times bestselling debut, Sister, was a New York Times Editor's Choice and Target Book Club pick, and has been translated into over thirty languages with international sales of over 1.5 million copies. Lupton lives in London with her husband and two sons.
Loading...
or
Not Currently Available for Direct Purchase