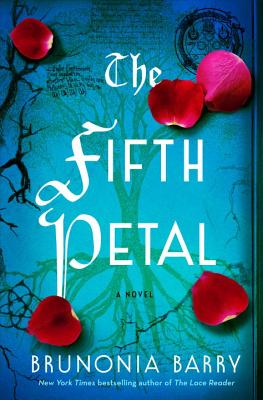 Could a witch hunt happen again in Salem?

For readers of Deborah Harkness's A Discovery of Witches, New York Times bestselling author of The Lace Reader Brunonia Barry returns to Salem with this spellbinding new thriller, a complex brew of suspense, seduction and murder.

When a teenage boy dies suspiciously on Halloween night, Salem's chief of police, John Rafferty, wonders if there is a connection between his death and Salem’s most notorious cold case, a triple homicide dubbed "The Goddess Murders," in which three young women, all descended from accused Salem witches, were slashed on Halloween night in 1989. He finds unexpected help in Callie Cahill, the daughter of one of the victims newly returned to town. Neither believes that the main suspect, Rose Whelan, respected local historian, is guilty of murder or witchcraft.

But exonerating Rose might mean crossing paths with a dangerous force. Were the women victims of an all-too-human vengeance, or was the devil raised in Salem that night? And if they cannot discover what truly happened, will evil rise again?

Praise For The Fifth Petal: A Novel…

Praise for The Fifth Petal:

“Dark and suspenseful, Barry’s well-constructed tale is filled with traps and red herrings as the truth is slowly revealed and Salem is forced to confront its sordid past.”
—Publishers Weekly

“Barry fans will welcome the return of beloved characters and the introduction of new ones into a contemporary Salem appropriately fraught with remnants and reminders of its dark and twisted history. This spooky, multilayered medley of mysteries is sure to be a bestseller.”
—Booklist (starred review)

"In contemporary Salem, a murder has taken place, with roots that reach back to the seventeenth-century witch trials. Filled with twists and turns, as well as ancient tradition and modern mystery, Barry’s story has deft pacing, a marvelous sense of place, and a quirky cast of characters. The Fifth Petal is another haunting tale by the author of The Lace Reader where past and present collide."
— DEBORAH HARKNESS, New York Times bestselling author of the All Souls trilogy

“Brunonia Barry’s Salem is alive with rich history, and with a unique and colorful cast of characters: witches and healers, lace readers, the well-to-do and the down-and-out.  And everyone’s got secrets.  The Fifth Petal is a mesmerizing take on the ways the past affects and influences the present.  “Time isn’t linear,” says one of the characters, and the way Barry artfully weaves together a modern-day crime, a twenty-five-year-old murder case, and the Salem witch trials, you’ll close the book believing that she’s absolutely right.”
— JENNIFER MCMAHON, New York Times bestselling author of The Winter People and The Night Sister

“Banshees, lost memories, and secret pasts each play a significant role in this novel; enthusiasts of the author’s earlier work and readers interested in the history of witchcraft and the occult will enjoy this return visit to Salem.”
—Library Journal

"The Fifth Petal is a literary thriller that beautifully straddles the line between sensational and sublime, illuminating history and hysteria in a fictional context that never fails to resonate as being very much of this world."
— The Strand Magazine

“Barry's tale isn't just an intriguing and evocative story, but also a strong social commentary...The Fifth Petal is an imaginative and haunting book that appeals to the emotions, the senses and the intellect."
— The Book Beat

"There is true magic in The Fifth Petal, where Salem’s dark history of murder threatens to destroy yet one more young woman, a descendant of one of the accused witches.  As in The Lace Reader, Brunonia Barry weaves together ancient myths, modern mysteries and the power and wisdom of a cabal of fearless women who’ve been touched by the invisible world."
— KATHLEEN KENT, author of The Heretic’s Daughter

"Brunonia Barry has done it again. If you liked The Lace Reader, you’re going to love her new novel, The Fifth Petal. A real page-turner about murder and prejudice and love and what’s possible and what isn’t. Enjoy."
— B.A. SHAPIRO, New York Times bestselling author of The Art Forger and The Muralist

"A seductive combination of suspense, history, myth - with a sprinkling of the supernatural - The Fifth Petal is an enormously satisfying mystery novel.  Brunonia Barry has created a world that is at once inviting and menacing, populated by characters both warmly familiar and surprising."
— ANDREW PYPER, author of The Damned and The Demonologist

"There are many writers who write wonderful books... then there are those rare writers who make magic. Brunonia Barry proves once again she is a sorcerer. Transported to Salem, I was lost in a Gothic tale that only the author of The Lace Reader could have conjured."
— M.J. ROSE, New York Times bestselling author of The Secret Language of Stones

"Written with pens dipped in magic and chills, THE FIFTH PETAL uncovers hidden corners where myth, malevolence, and fervor converge in Salem, Massachusetts. Tendrils from the past and present wrap the complicated characters—and the reader’s attention—until the stunning final sentence. Brunonia Barry weaves miracles."
— RANDY SUSAN MEYERS, bestselling author of The Murderer’s Daughters

"The Fifth Petal is a brilliant and suspenseful tale that prods at embers still live in a buried past. By weaving together the lost evidence of two Salem tragedies, Brunonia Barry’s novel prompts profound consideration of the respect for history, the importance of resolution, and the power of voice. Highly recommended."
— THERESE WALSH, author of The Moon Sisters

"Spellbinding! Clear your schedule--this beautifully written and seamlessly researched tale is a thriller, a romance, and a deeply felt investigation of the witch frenzy that haunts us to this day--and it's the book everyone will be buzzing about. Surprising, compelling and profound--even revelatory--it will stay with you long after the last page."
— HANK PHILLIPPI RYAN, Agatha, Anthony, and Mary Higgins Clark award winning author

Brunonia Barry is the New York Times and international best selling author of The Lace Reader, The Map of True Places, and her latest book: The Fifth Petal. Her work has been translated into more than thirty languages. She was the first American author to win the International Women’s Fiction Festival’s Baccante Award and was a past recipient of Ragdale Artists’ Colony’s Strnad Invitational Fellowship as well as the winner of New England Book Festival’s award for Best Fiction. Her reviews and articles on writing have appeared in the London Times and the Washington Post, and the Huffington Post. Brunonia co-chairs the Salem Athenaeum’s Writers’ Committee. She lives in Salem with her husband Gary Ward and their dog, Angel. Gary and Bru are the organizers of the Salem Literary Festival.

1. Contemporary Salem is a safe haven for neo-witches, greatly enhancing the city’s tourist trade, but there are many who want to “ditch the witch.” Could a modern day witch hunt happen in Salem again, and, if so, what might it look like? Are witch hunts happening in other parts of the world?

2. “You know who you are, you have always been other,” Rose says in her Book of Trees. In what way is each character in the book “other”? Rose later claims every culture, and every individual, harbors a prejudice against those they consider “other.” Do you agree?

3. Callie longs for home and family, and particularly for a mother figure, having lost her own mother at a young age. How does Callie fulfill that dream, and at what cost?

4. Is the banshee a goddess or a monster? Its power seems to reside in a woman’s raised voice. How does that power manifest in the hands of the different characters?

5. At one point in the story, Rose tells Callie not to “court the strike.” What does she mean, and why is this important to the story?

6. Social media is both a resource and a curse in the novel. The wealth of available information helps Rafferty with his case, but the opinions of anonymous posters also condemn Rose, mirroring Salem’s accusers of 1692. Discuss the positive and negative impacts of social media.

7. Brunonia Barry, who lives in Salem, is often surprised by the generational guilt the city still suffers for the 1692 witch hangings. In what ways does this manifest in the story?

8. Sound and vibration figure in The Fifth Petal, with a capacity to both hurt and heal. How does the banshee’s killer sound relate to vibration and music therapy? How does the music of the spheres that Callie hears during meditation relate to the ancient music heard in Matera?

10. Trees symbolize both the interconnectedness of all life and the roots of humanity in this story. How does the sacred oak help Rose, and what is the significance of the Tree of Life? What does it mean to Callie in her translation of Rose’s Book of Trees?