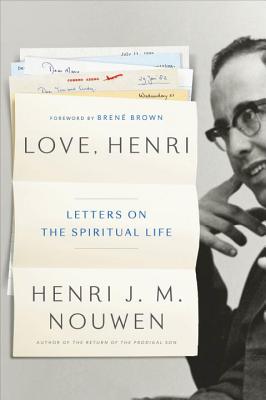 Letters on the Spiritual Life

Seven million copies of his books in print! This collection of over 100 unpublished letters from the bestselling author of such spiritual classics as The Return of the Prodigal Son and The Wounded Healer offers deep spiritual insight into human experience, intimacy, brokeness, and mercy.

Over the course of his life, Henri Nouwen wrote thousands of letters to friends, acquaintances, parishioners, students, and readers of his work all around the world. He corresponded in English, Dutch, German, French, and Spanish, and took great care to store and archive the letters decade after decade. He believed that a thoughtful letter written in love could truly change someone's life. Many people looked to Nouwen as a long distance spiritual advisor.

Love, Henri consists of over a hundred letters that stretch from the earliest years of Henri's career up through his last 10 years at L'Arche Daybreak. Rich in spiritual insights the letters highlight a number themes that emerged in both Henri's work over the years, including vocation, solitude, prayer, suffering, and perseverance in difficult times. These deeply spiritual letters, sometimes poignant, sometimes funny, ulimately demonstrate the rich value of communicating with God through others.

HENRI NOUWEN was a Dutch-born Catholic priest, professor, and pastor, who gained international renown as the author of over 30 books on the spiritual life, including such classics as The Wounded Healer, The Inner Voice of Love, and The Return of the Prodigal Son. Nouwen's books have been translated into more than 30 languages and have sold upwards of seven million copies worldwide, resonating with people across the religious, spiritual, cultural, and political spectrum. Since his death in 1996, ever-increasing numbers of readers, writers, teachers, and seekers have been guided by his literary legacy.

Praise For Love, Henri: Letters on the Spiritual Life…

"Dear Henri,
Your timeless words and loving spirit are quiet prayers that will forever live in my heart.
Love, Brené." –Brené Brown, from her Foreword

"I love this collection. It is for me, a spiritual autobiography. Henri's letters reveal the ever-evolving, ever-deepening, ever-struggling heart of my strong yet vulnerable friend." –Sue Mosteller, from her Epilogue
or
Buy Here
Copyright © 2020 American Booksellers Association