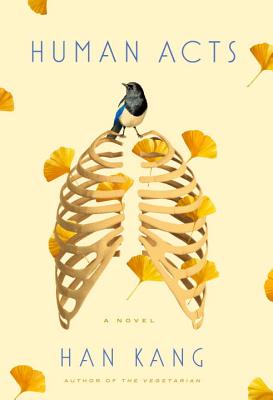 From the internationally bestselling author of The Vegetarian, a “rare and astonishing” (The Observer) portrait of political unrest and the universal struggle for justice.

In the midst of a violent student uprising in South Korea, a young boy named Dong-ho is shockingly killed.

The story of this tragic episode unfolds in a sequence of interconnected chapters as the victims and the bereaved encounter suppression, denial, and the echoing agony of the massacre. From Dong-ho’s best friend who meets his own fateful end; to an editor struggling against censorship; to a prisoner and a factory worker, each suffering from traumatic memories; and to Dong-ho's own grief-stricken mother; and through their collective heartbreak and acts of hope is the tale of a brutalized people in search of a voice.

An award-winning, controversial bestseller, Human Acts is a timeless, pointillist portrait of an historic event with reverberations still being felt today, by turns tracing the harsh reality of oppression and the resounding, extraordinary poetry of humanity.

Han Kang was born in 1970 in South Korea. In 1993 she made her literary debut as a poet, and was first published as a novelist in 1994. A participant in the International Writing Program at the University of Iowa, Han has won the Man Booker International Prize, the Yi Sang Literary Prize, the Today’s Young Artist Award, and the Manhae Prize for Literature. She currently works as a professor in the department of creative writing at the Seoul Institute of the Arts.

Praise For Human Acts: A Novel…

”Human Acts is unique in the intensity and scale of this brutality… [T]he novel details a bloody history that was deliberately forgotten and is only now being recovered.”—The Nation

"[Han Kang's] new novel, Human Acts, showcases the same talent for writing about corporeal horrors, this time in the context of the 1980 Gwangju uprising.”—TIME Magazine

“The long wake of the killings plays out across the testimonies of survivors as well as the dead, in scenarios both gorily real and beautifully surreal.”—Vulture

"Human Acts is stunning. Book reviews evaluate how well a book does what it sets out to do, and so we sometimes write nice things about books that perfectly fulfill trivial aims. Otherwise, we'd always be complaining that romance novels or political thrillers fail to justify the ways of God to men. But Han Kang has an ambition as large as Milton's struggle with God: She wants to reconcile the ways of humanity to itself.”—NPR.org

“Engrossing… The result is torturously compelling, a relentless portrait of death and agony that never lets you look away. Han’s prose—as translated by Deborah Smith—is both spare and dreamy, full of haunting images and echoing language. She mesmerizes, drawing you into the horrors of Gwangju; questioning humanity, implicating everyone… Unnerving and painfully immediate.”—Los Angeles Times

“Revelatory … nothing short of breathtaking… In the end, what Han has re-created is not just an extraordinary record of human suffering during one particularly contentious period in Korean history, but also a written testament to our willingness to risk discomfort, capture, even death in order to fight for a cause or help others in times of need.”—San Francisco Chronicle

“But where Kang excels is in her unflinching, unsentimental descriptions of death. I am hard pressed to think of another novel that deals so vividly and convincingly with the stages of physical decay. Kang’s prose does not make for easy reading, but there is something admirable about this clear-eyed rendering of the end of life.”—Boston Globe

“Absorbing… Han uses her talents as a storyteller of subtlety and power to bring this struggle out of the middle distance of ‘history’ and into the intimate space of the irreplaceable human individual.”—Minneapolis Star-Tribune

“Kang is an incredible storyteller who raises questions about the purpose of humanity and the constant tension between good and evil through the heartbreaking experiences of her characters. Her poetic language shifts fluidly from different points of view, while her fearless use of raw, austere diction emulates the harsh conflicts and emotions raging throughout the plot. This jarring portrayal of the Gwangju demonstrations will keep readers gripped until the end.”—Booklist (starred)

"Pristine, expertly paced, and gut-wrenching… Human Acts grapples with the fallout of a massacre and questions what humans are willing to die for and in turn what they must live through. Kang approaches these difficult and inexorable queries with originality and fearlessness, making Human Acts a must-read for 2017."—Chicago Review of Books

“Though her subject matter is terrifying, her prose is too beautiful, her images too perfectly crystallized to wince and turn away from them… ‘Human Acts’ is a slim novel weighted with philosophical and spiritual inquiry, but if offers no consolations. Rather, it grapples with who we are, what we are able to endure, and what we inflict upon other people…”—St. Louis Post-Dispatch

“Kang interconnects the chapters in her novel to focus on characters who are irreparably affected by the historic Gwangju Uprising in South Korea in May 1980, in which government troops killed an estimated 600 protesters. The Guardian calls it ‘an act of unflinching witness.’”—Sacramento Bee

“Reading about human acts like these can be excruciating. But true to the urgency conveyed through its frequent use of second-person narration, Han’s book is also filled with human acts involving profiles in courage that inspire hope… In a novel whose heroes include editors, actors and writers—each battling to remember while censors try to forget—Han’s own book embodies the miracle this passage describes.”—Milwaukee Journal-Sentinel

“Following The Vegetarian, one of the most stunning novels of 2016, Human Acts is yet another belatedly translated work from South Korean writer Han Kang. Centering on the killing of a young boy during a student uprising, the novel follows the rippling effects of the tragedy.”—Huffington Post

“After dazzling us with The Vegetarian, which won the 2016 Man Booker International Prize, Han Kang is dropping another amazing read. Set in South Korea in 1980, in the wake of a student protest turned horrifically violent, the book follows a cast of characters as they deal with the harrowing consequences of that day.”—Bustle

"...Inventive, intense and provocative...a work of considerable bravery...'Human Acts' is a profound act of protest in itself."—Newsday

“Kang’s forthcoming Human Acts focuses on the 1980 Korean Gwangju Uprising, when Gwangju locals took up arms in retaliation for the massacre of university students who were protesting. Within Kang tries to unknot ‘two unsolvable riddles’ — the intermingling of two innately human yet disparate tendencies, the capacity for cruelty alongside that for selflessness and dignity.” —The Millions

“This novel is a thoughtful and humane answer to difficult questions and a moving tribute to victims of the atrocity.”—BookPage

“South Korean novelist Han first gained attention stateside with The Vegetarian, her first novel to be translated into English, last year. This follow-up novel follows a group of people who are affected both directly and indirectly by the death of a young boy during a violent student protest in South Korea.”—Men’s Journal (online)

“Han Kang made a big splash last year with The Vegetarian. Using several points of view to delve into the death of one adolescent boy during the Gwangju Uprising, Human Acts will surely continue Kang’s praise among critics and readers… Human Acts ruthlessly examines what people are capable of doing to one another, but also considers how the value of one life can affect many.”—Book Riot

“Han Kang’s first novel to appear in English, The Vegetarian, was one of the most jarring works of fiction we’ve read in a while. Human Acts takes a broader view of humanity, focusing on a host of reactions to the death of a young man in a political action in South Korea. We’re looking forward to experiencing her prose in a new context with this novel.”—Vol. 1 Brooklyn

"Human Acts is elegantly written, unflinchingly brutal and absolutely real. It is not so much a novel as it is a profound act of connection; it is beyond powerful. Han Kang is what most writers spend their lives trying to be: a fearless, unsentimental teller of human truths."—Lisa McInerney, Baileys Women's Prize-winning author of The Glorious Heresies

“This is a book that could easily founder under the weight of its subject matter. Neither inviting nor shying away from modern-day parallels, Han neatly unpacks the social and political catalysts behind the massacre and maps its lengthy, toxic fallout. But what is remarkable is how she accomplishes this while still making it a novel of blood and bone. The characters frequently address themselves to an unnamed “You”… This sense of dislocation is most obvious when a dead boy’s soul converses with his own rotting flesh – and it’s here that the language comes closest to the gothic lyricism of Han’s previous book, The Vegetarian…By choosing the novel as her form, then allowing it to do what it does best – take readers to the very centre of a life that is not their own – Han prepares us for one of the most important questions of our times: “What is humanity? What do we have to do to keep humanity as one thing and not another?” She never answers, but this act of unflinching witness seems as good a place to start as any.”—Eimear McBride, The Guardian

"Harrowing...Han’s novel is an attempt to verbalize something unspeakable… But she humanizes the terrible violence by focusing on the more mundane aspects: tending and transporting bodies, or attempting to work an ordinary job years later. And by placing the reader in the wake of Dong-ho’s memory, preserved by his family and friends, Han has given a voice to those who were lost.”—Publishers Weekly

“With exquisitely controlled eloquence, the novel chronicles the tragedy of ordinariness violated…In the echo chambers of Han’s haunting prose, precisely and poetically rendered by Smith, the sound of that heartbeat resonates with defiant humanity.”—New Statesman

“Han Kang’s writing is clear and controlled and she handles the explosive, horrifying subject matter with great warmth.”—The Times

“Searing…In Human Acts  [Kang] captures the paradox of being human: the meat-like, animal reduction of our humanity—the dead bodies of the beginning chapter – alongside our ability to love and suffer for our principles, and die for them, that make us truly human. She is excellent in summarizing this paradox… If it hopes to tie the personal with the political, it does the former so much more powerfully: a mother thinking of her dead son, for example, displays literary mastery – as subtle and specific as it is universally heartbreaking.”—The Independent

“A technical and emotional triumph... A conversation of which we rarely hear both sides: the living talking to the dead, and the dead speaking back.”—The Sunday Telegraph (5 star review)

“A grim but heartfelt performance, touching on the possibility of forgiveness and the survival of the spirit.”—The Sunday Times

“Harrowing…Human Acts portrays people whose self-determination is under threat from terrifying external forces; it is a sobering meditation on what it means to be human.”—Financial Times
“A harrowing journey… By its very existence Human Acts is an important and necessary book…Astonishing.”—The National

"Human Acts is a stunning piece of work. The language is poetic, immediate, and brutal. Han Kang has again proved herself to be a deft artist of storytelling and imagery." — Jess Richards

“A rare and astonishing book, sensitively translated by Deborah Smith, Human Acts enrages, impassions, and most importantly, gives voices back to who were silenced” —The Observer (UK)
or support indie stores by buying on
Copyright © 2020 American Booksellers Association