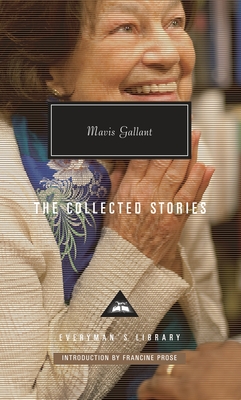 This generous collection of fifty-two stories, selected from across her prolific career by the author, includes a preface in which she discusses the sources of her art.

A widely admired master of the short story, Mavis Gallant was a Canadian-born writer who lived in France and died in 2014 at the age of ninety-one. Her more than one hundred stories, most published in The New Yorker over five decades beginning in 1951, have influenced generations of writers and earned her comparisons to Anton Chekhov, Henry James, and George Eliot. She has been hailed by Michael Ondaatje as “one of the great story writers of our time.”

With irony and an unfailing eye for the telling detail, Gallant weaves stories of spare complexity, often pushing the boundaries of the form in boldly unconventional directions. The settings in The Collected Stories range from Paris to Berlin to Switzerland, from the Italian Riviera to the Côte d’Azur, and her characters are almost all exiles of one sort or another, as she herself was for most of her expatriate life. The wit and precision of her prose, combined with her expansive view of humanity, provide a rare and deep reading pleasure. With breathtaking control and compression, Gallant delivers a whole life, a whole world, in each story.

MAVIS GALLANT was born in Quebec, Canada, in 1922. She began her career as a journalist, before switching to fiction in 1950. She moved to Paris a decade later, and spent the rest of her life there. She published 116 stories in The New Yorker over the course of her career; in addition, she wrote two novels, a play, and a collection of essays. A recipient of the 2002 Rea Award for the Short Story and the 2004 PEN/Nabokov Award for lifetime achievement, she died in 2014 at the age of ninety-one.

“One of the most brilliant story writers in the language.”
—The New Yorker

“Gallant’s talent is as versatile and witty as it is somber and empathetic.”
—John Updike

“Funny, exacting, and stern . . . Gallant’s chronicles of internal and external exile are a fitting tribute to a diasporic century.”
—The Guardian (London)

“Mavis Gallant has a technical daring and an innovative freedom that, as in a painting by Velásquez, remain hidden unless you look closely, pay attention, and at the same time manage to surrender to the mystery of art . . . She places a huge amount of faith in her reader’s intelligence, a faith which demands and rewards careful reading. But she’s also very funny, and a great deal of fun. Her stories are full of satisfying reverses and breathtaking passages of dazzlingly precise, virtuosic writing.”
—from the new Introduction by Francine Prose
or
Buy Here
Copyright © 2020 American Booksellers Association