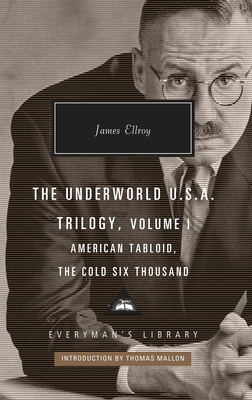 Thus begins the Underworld U.S.A. Trilogy. It's James Ellroy's pop history of the 1960s, his window-peeper's view of government misconduct, his dirty trickster's take on the great events of an incendiary era. It's a tour de force of the American idiom, and an acknowledged masterpiece.

The Cold Six Thousand takes us from Dallas to Vietnam to Memphis to the kitchen of the Ambassador Hotel in L.A. We're rubbing shoulders with RFK and MLK, calamitous klansmen, noted mafiosi. We're forced to relive the American sixties--and we come away breathless.

The first two books of the Underworld U.S.A. Trilogy revisit the most anarchic decade in our history. They are defined by their brutal linguistic flair and reckless panache.

JAMES ELLROY was born in Los Angeles in 1948. He is the author of the Underworld U.S.A. Trilogy--American Tabloid, The Cold Six Thousand, and Blood's A Rover--and the L.A. Quartet novels, The Black Dahlia, The Big Nowhere, L.A. Confidential, and White Jazz. He lives in Colorado.
or support indie stores by buying on
Copyright © 2020 American Booksellers Association