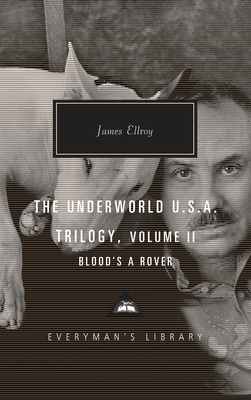 The Underworld U.S.A. Trilogy concludes. We've traversed the interlocked conspiracies of the decade and are there for the wind-up and swan songs.

Blood's A Rover takes us into the seventies. MLK and RFK are dead. The Democratic National Convention in Chicago has spawned chaos. There's a punk-kid private eye in L.A. He's clashing with a mob goon and an enforcer for J. Edgar Hoover. There's an armored-car heist and a cache of missing emeralds. There's bad voodoo in the Dominican Republic and Haiti. Amidst it all is a revolutionary, Joan Rosen Klein. The kid P.I., the mob goon, and Hoover's enforcer love her unto death. Blood's A Rover gives us the private nightmare of public policy on an epic scale.

JAMES ELLROY was born in Los Angeles in 1948. He is the author of the Underworld U.S.A. Trilogy--American Tabloid, The Cold Six Thousand, and Blood's A Rover--and the L.A. Quartet novels, The Black Dahlia, The Big Nowhere, L.A. Confidential, and White Jazz. He lives in Colorado.
Loading...
or
Not Currently Available for Direct Purchase