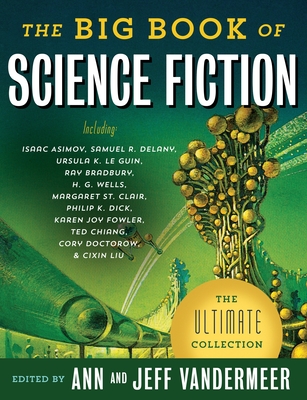 The Big Book of Science Fiction

Quite possibly the greatest science fiction collection of all time—past, present, and future!

What if life was neverending? What if you could change your body to adapt to an alien ecology? What if the pope were a robot? Spanning galaxies and millennia, this must-have anthology showcases classic contributions from H. G. Wells, Arthur C. Clarke, Octavia E. Butler, and Kurt Vonnegut, alongside a century of the eccentrics, rebels, and visionaries who have inspired generations of readers. Within its pages, you’ll find beloved worlds of space opera, hard SF, cyberpunk, the New Wave, and more. Learn about the secret history of science fiction, from titans of literature who also wrote SF to less well-known authors from more than twenty-five countries, some never before translated into English. In The Big Book of Science Fiction, literary power couple Ann and Jeff VanderMeer transport readers from Mars to Mechanopolis, planet Earth to parts unknown. Immerse yourself in the genre that predicted electric cars, space tourism, and smartphones. Sit back, buckle up, and dial in the coordinates, as this stellar anthology has got worlds within worlds.

Praise For The Big Book of Science Fiction…

“A stunning and satisfying retrospective. . . . This is a complex and fantastic project. . . . It’s handsome, huge, and amazingly well-curated; our editors, here, have done a fabulous job. . . . I couldn’t ask for more, truly. It’s diverse, wide-ranging, engaging, and fun; the stories are introduced well, juxtaposed better, and the overall effect is one of dizzying complexity and depth.” —Tor.com

“A definitive volume of the genre. . . . This is a big book, and it’s an essential tome for readers who are dedicated SF fans or casual newcomers alike. Do they manage to redefine science fiction? I think so.” —The Verge

“The Big Book of Science Fiction is exactly what it says it is, nearly 1,200 pages of stories by the genre’s luminaries, like H. G. Wells, Arthur C. Clarke and Ursula K. Le Guin, as well as lesser-known authors. . . . [it] prizes diversity of all kinds, and translates work by several writers into English—some for the first time.” —The New York Times Book Review

"How big is big? In this case, we’re talking nearly 1,200 double-columned pages, dozens of representative short classics of science fiction, and newly translated work from around the world. There are surprises, too: Did you know that W.E.B. Du Bois wrote sf? That’s just one indication that the VanderMeers hope to establish a more culturally diverse science fiction canon." —The Washington Post (10 Hidden Gems)

“An enormous anthology of science fiction put together by two of our sharpest purveyors of the genre. . . . This volume is a perfect mix of the classic and the unexpected.” —Flavorwire

“Everything about this book is exciting. First, it’s huge—some 750,000 words fill its 1,200 pages. Second, it’s been compiled by one of sci-fi’s coolest power couples—she’s a distinguished editor (Tor.com, Weird Tales), he’s a superb writer (2014’s Southern Reach trilogy). And finally, it’s not just another survey of white men in science fiction (aka Phillip K.’s dicks). For every Wells and Dick and George R.R. Martin, there’s work by Le Guin, Butler, and Katherine MacLean—not to mention stories from all over the world, from China (Liu Cixin) to Argentina (Silvina Campo). Gift it to a friend, then buy one for yourself.” —Jason Kehe, Wired (This Summer’s Must-Read Books)

"Borges once imagined an infinite book with pages of infinite thinness. The Vandermeers approach that event horizon with this double-columned paperback of more than 1,200 pages, containing some 750,000 words in more than 100 stories. . . . A review of a few hundred words can only begin to suggest both the contents and quality of this excellent collection of short fiction. The Vandermeers sidestep territorial quagmires by defining sci-fi, simply and effectively, as fiction that depicts the future in a stylized or realistic manner. This definition allows them a wide range of choices. . . . This book could serve as a portal to years of pleasurable and thought-provoking reading." —Milwaukee Journal Sentinel

“Science fiction anthologies are a dime a dozen, but there’s that one that comes across every now and again that is truly essential. This is the case for Ann and Jeff Vandermeer’s Big Book of Science Fiction, an anthology that goes back to the genre’s roots in pulp fiction, all the way up to the end of the 20th Century, picking the best stories from around the world (including a number never before translated into English) . . . We took one look at this massive anthology’s Table of Contents, and fell in love at first sight.” —io9

“Whether you’re a life-long fan of science fiction or layperson diving deep into a new genre, this incredible anthology offers a comprehensive genre education between two covers. In more than 1,000 pages and upwards of 100 stories, the VanderMeers have compiled a truly representative history of SF from its early beginnings to its myriad modern incarnations. . . . This is an unparalleled achievement, and undoubtedly one of the most important books you’ll buy this year.” —Barnes and Noble Booksellers’ Picks

“When it comes to massive and comprehensive anthologies focused on a specific strain of fiction, the editorial team of Ann and Jeff VanderMeer has set the bar remarkably high.”  —LitHub

“Ann and Jeff VanderMeer are a powerhouse editing team; their recent anthology of weird fiction helped define a genre, and took a smart historical global view while doing it. This anthology does a similar feat to science fiction, with an expansive aesthetic and work from a host of writers, including W.E.B. DuBois, Cixin Liu, Ursula K. Le Guin, and George R.R. Martin.” —Vol. 1 Brooklyn

“These stories were chosen for continuing relevance and arranged to interplay like voices in a great conversation: shifting and offering new insights. . . . Throughout this collection, every piece of wrack, scavenger bird, and sorceress contains multitudes.” —Locus Magazine

"At 105 stories—taken from around the world and since the genre’s very beginnings to its recent heights—and more than 1,000 pages, this extraordinary anthology handily earns its billing as the 'ultimate collection' of science fiction. . . . The VanderMeers, longtime SF/F editors (The Time Traveler’s Almanac and many others), provide a critical survey of the field as well as incisive biographies of the contributors." —Publishers Weekly (Starred Review)

“If your readerly appetite is not quite novel-sized, you’ll definitely want to check out this month’s short fiction offerings. If you only choose one title, make it The Big Book of Science Fiction edited by Ann & Jeff VanderMeer.” —Kirkus

Ann VanderMeer currently serves as an acquiring fiction editor for Tor.com, Cheeky Frawg Books, and weirdfictionreview.com. She was the editor-in-chief for Weird Tales for five years, during which time she was nominated three times for the Hugo Award, winning one. Along with multiple nominations for the Shirley Jackson Award, she also has won a World Fantasy Award and a British Fantasy Award for co-editing The Weird: A Compendium of Strange and Dark Stories. Other projects have included Best American Fantasy, three Steampunk anthologies, and a humor book, The Kosher Guide to Imaginary Animals. Her latest anthologies include The Time Traveler’s Almanac, Sisters of the Revolution, an anthology of feminist speculative fiction and The Bestiary, an anthology of original fiction and art.


Jeff VanderMeer's most recent fiction is the NYT-bestselling Southern Reach trilogy (Annihilation, Authority, and Acceptance), which Entertainment Weekly included on its list of the top ten novels of 2014 and which prompted the New Yorker to call the author “the weird Thoreau.”  The series has been acquired by publishers in 34 other countries. Paramount Pictures/Scott Rudin Productions acquired the movie rights and Annihilation won both the Nebula Award and Shirley Jackson Award for best novel. VanderMeer’s nonfiction has appeared in the New York Times, the Guardian, the Washington Post, the Atlantic.com, and the Los Angeles Times. A three-time winner of the World Fantasy Award, he has also edited or coedited many iconic fiction anthologies, taught at the Yale Writers’ Conference and the Miami International Book Fair, lectured at MIT, Brown, and Library of Congress, and serves as the co-director of Shared Worlds, a unique teen writing camp located at Wofford College. His forthcoming novel is Borne.
Loading...
or support indie stores by buying on