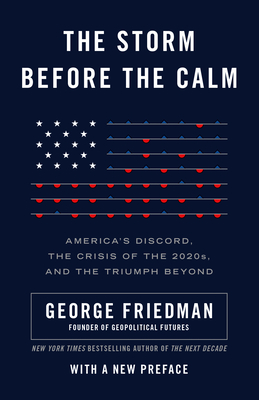 The Storm Before the Calm

America's Discord, the Crisis of the 2020s, and the Triumph Beyond

In his riveting new book, noted forecaster and bestselling author George Friedman turns to the future of the United States. Examining the clear cycles through which the United States has developed, upheaved, matured, and solidified, Friedman breaks down the coming years and decades in thrilling detail.
American history must be viewed in cycles—particularly, an eighty-year "institutional cycle" that has defined us (there are three such examples—the Revolutionary War/founding, the Civil War, and World War II), and a fifty-year "socio-economic cycle" that has seen the formation of the industrial classes, baby boomers, and the middle classes. These two major cycles are both converging on the late 2020s—a time in which many of these foundations will change. The United States will have to endure upheaval and possible conflict, but also, ultimately, increased strength, stability, and power in the world.
Friedman's analysis is detailed and fascinating, and covers issues such as the size and scope of the federal government, the future of marriage and the social contract, shifts in corporate structures, and new cultural trends that will react to longer life expectancies. This new book is both provocative and entertaining.

Praise For The Storm Before the Calm: America's Discord, the Crisis of the 2020s, and the Triumph Beyond…

"[A] prescient anticipation of our current woe... the book contains real insights.”
--The Wall Street Journal

“The vitriol of the Trump era masks crises in our economy and governing institutions that will deepen before resolving themselves, according to this probing and ultimately hopeful diagnosis of America’s discontents . . . Friedman offers a lucid, stimulating assessment of which way the wind is blowing.”
--Publishers Weekly

“[Friedman] offers a sharp analysis of American life, especially the roots of the knack for reinvention that allows the nation to start over after crises. Americans invented their country, he writes, and lacking shared history and culture, 'invented themselves.' Friedman also discusses the nation's reluctance to accept its responsibilities as the 'sole world power' and the tensions between its technocratic and industrial working classes. A provocative, idea-filled burst of prognostication.”
--Kirkus

"Friedman’s well-written book lays out convincing cases for how the institutional and socioeconomic cycles have played out repeatedly since America’s founding and how the two patterns will, for the first time, almost converge during this decade."
--Lone Star Literary Life

“This book is of obvious general interest but is essential reading for anyone with a role in strategic planning. It combines clear, interesting prose with a thought provoking projection of upcoming challenges and ultimate outcomes.”
--Douglas Duncan, Chief Economist, Fannie Mae

“In The Storm Before the Calm, George applies his geopolitical forecasting model to the United States and tells a unique story of American history from our founding to today. The result is a useful dispassionate framework for understanding where we are now and where we are likely going as nation.”
--Joe Daly, Gallup Senior Partner

Dr. George Friedman is Founder and Chairman of Geopolitical Futures, a company dedicated to forecasting the course of the international system (www.geopoliticalfutures.com). He is an internationally recognized strategist on global affairs and appears frequently in the media, and is a New York Times bestselling author of The Next 100 Years, Flashpoints,The Next Decade, The Storm Before the Calm, America's Secret War, The Future of War and The Intelligence Edge. Prior to founding Geopolitical Futures in 2015, Friedman was Chairman of Stratfor, the geopolitical intelligence publishing and consulting firm he founded in 1996. He lives in Austin, Texas.
Loading...
or support indie stores by buying on