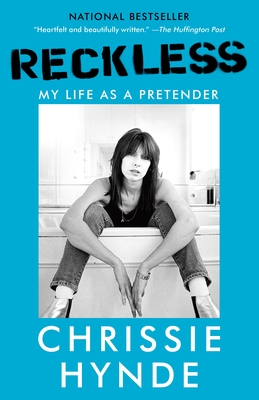 Chrissie Hynde, leader of the Pretenders, is one of the most widely imitated figures in rock: sexy, unflappable, vulnerable yet tough, a groundbreaking songwriter and performer. In these pages, Chrissie gives us her story. We see her all-American 1950s childhood in Ohio, and her teenage self falling for the rock music of the 1960s. We follow her to London, where she takes a job with NME and makes her way into the churning ’70s London punk scene, meeting Lemmy, Sid Vicious and Iggy Pop, living in squats, writing songs, playing in early versions of the Clash and the Damned. Her work with the Pretenders—which melded punk, New Wave, and pop to irresistible effect—would catapult her to instant stardom. Through it all is Chrissie’s unmistakable voice, ringing with fearless emotional honesty, a razor-sharp wit, and an enduring belief in the power of rock’n’roll.


Praise For Reckless: My Life as a Pretender…

“A love letter to rock ‘n’ roll. . . . Honest and distinctive. . . . [Reckless] gives an accurate sense of what it’s like to sit down with Chrissie Hynde. . . . Acerbic, clever, confrontational.” —The New York Times Book Review

“Rich and ragged. . . . Engaging. . . . [Hynde] writes just like she lives, and just like she makes music. She does it her way, which is an inimitable multiplicity of things: impulsive, untamed, ragged, proud.” —The Daily Beast

“Chrissie Hynde’s autobiography, Reckless, out-rocks them all.” —The Washington Post

“A stirring tale of rock, regret and redemption. . . . Unflinching. . . . Reckless is a survivor’s tale, a portrait of a woman bolstered by conviction and buoyed by extreme fortitude. ” —The Buffalo News

“This long-awaited memoir tells [Hynde’s] life story in full and utterly fascinating detail. . . . She brings a fantastic eye for detail, a withering and sardonic sense of humor, and a fearless emotional honesty.” —Library Journal

Chrissie Hynde is a singer, songwriter, and guitarist, best known as the lead singer and songwriter of the enduring rock band The Pretenders. Hynde released nine studio albums with The Pretenders, beginning with 1980’s Pretenders, which Rolling Stone called the #13 Best Debut Album of All Time. Most recently, she released her first solo album, Stockholm, in 2014. She lives in London.