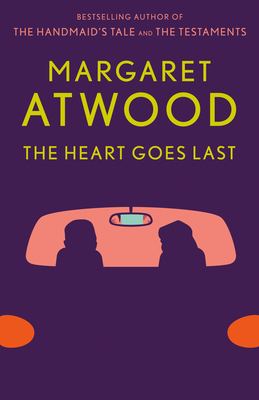 From the bestselling author of The Handmaid's Tale and The Testaments—in the gated community of Consilience, residents who sign a contract will get a job and a lovely house for six months of the year ... if they serve as inmates in the Positron prison system for the alternate months.

Stan and Charmaine, a young urban couple, have been hit by job loss and bankruptcy in the midst of nationwide economic collapse. Forced to live in their third-hand Honda, where they are vulnerable to roving gangs, they think the gated community of Consilience may be the answer to their prayers. At first, this seems worth it: they will have a roof over their heads and food on the table. But when a series of troubling events unfolds, Positron begins to look less like a prayer answered and more like a chilling prophecy fulfilled.

The Heart Goes Last is a vivid, urgent vision of development and decay, freedom and surveillance, struggle and hope—and the timeless workings of the human heart.

“Quintessential Atwood. . . . The writing here is so persuasive, so crisp, that it seeps under your skin.” —The Boston Globe

“An arresting perspective on the confluence of information, freedom, and security in the modern age.” —The New Yorker

“A gripping, psychologically acute portrayal of our own future gone totally wrong, and the eternal constant of flawed humanity.” —Huffington Post

“Dystopia virtuoso Margaret Atwood turns her effortless world-building, deft humor and grim commentary on the depths of human hubris to the prison industrial complex, love and free will.” —The Denver Post

“Rare apocalyptic entertainment. . . . Not only does Atwood sketch out an all-too-possible future but she also looks to the past, tapping into archetypes from fairy tales and myth, giving the novel a resonance beyond satire.” —The Miami Herald

“Poignant. . . . Gloriously madcap. . . . You only pause in your laughter when you realise that, in its constituent parts, the world she depicts here is all too horribly plausible.” —The Guardian (London)

“Wonderful. . . . Explores the idea of a powerful system and its discontents. . . . Atwood’s The Heart Goes Last is a riveting addition to her oeuvre.” —Electric Literature

“Atwood’s creepy but entertaining vision of a possible future.” —The Washington Times

“Fast-paced and funny. . . . True love ultimately endures in The Heart Goes Last, but so do the real terrors present in Atwood novels, all too often manifesting in ours.” —PopMatters

“Eerily prophetic. . . . A heady blend of speculative fiction with noir undertones that is provocative, powerful and will prompt all readers to reassess which parts of their humanity are for sale.” —BookPage