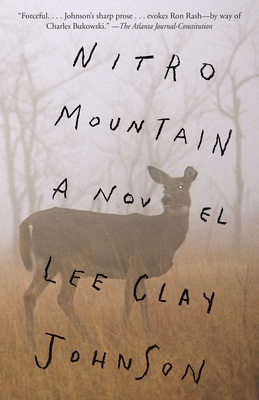 In the mine-riddled town of Bordon, Virginia, a group of lost souls are bound together by alcohol, small-time crime, and music.

Leon is a lovesick bass player with a broken hand and a belief that next time—next time—he’ll definitely get it right; Jennifer is the bright-but-battered waitress who can’t quite escape the orbit of Arnett, the local drug dealer. When Jennifer convinces Leon to murder Arnett so she can finally be free, a dark chain of events is set in motion, its violence echoing the pain and misery that shape their fractured lives.

“Lee Johnson is a natural-born writer. He inhabits every one of his characters—the good, the bad, and those that swing back and forth.” —John Casey, author of Spartina

“A worthy addition to the growing canon of contemporary Appalachian noir…. Nitro Mountain is like the home we failed to escape.” —Electric Lit

“Brutal and beautiful…. You’ll find yourself engrossed in the hard times and bad choices of [Nitro Mountain’s] characters and, ultimately, the humanity we all share.” —Richmond Times-Dispatch

“Cover to cover, the book exerts a fierce magnetic pull, sucking its reader into a profound desolation.” —Nashville Scene

“Lee Clay Johnson punches through the basement window of the American Canon Library, gropes across the spines of Leon Rooke, Denis Johnson, yes, Flannery O’Connor and Mr. Bill, and, heir-apparent to none and all, achieves a grasp farther than his reach. Cut-bloodied smelling of bourbon, he retrieves the book you have in your hand, some far and ancient tale best pronounced from Genesis. A masterwork of a first novel.” —Mark Richard, author of House of Prayer No. 2: A Writer’s Journey Home


“Appalachian noir at its darkest and most deranged . . . An ambitious, disturbing, and daring debut.” —Kirkus Reviews (starred)


“A suspenseful, action-packed thriller that’s also a brilliant study in humanity and what pushes someone over the line.” —Jill McCorkle, author of Life After Life


“In Nitro Mountain, Lee Clay Johnson gives us … a cast of low-life bar rats trying to feel or figure out what, if anything, is precious, and how to save one another before it’s too late.” —Darcy Steinke, author of Sister Golden Hair


“There is rough, real music in the voices of these characters. . . . Hilarious, harsh, original.” —Amy Hempel


“The sort of reckless, dangerous comedy Flannery O'Connor might have written if she'd known more about drink, drugs, and country music. . . . Lee Clay Johnson is a writer with abundant and scary gifts and consummate skill; Nitro Mountain is a novel you can't put down and won't forget.” —David Gates, author of A Hand Reaches Down to Guide Me

Lee Clay Johnson grew up around Nashville, Tennessee, in a family of bluegrass musicians. He holds a BA from Bennington College and an MFA from the University of Virginia. His work has appeared in The Oxford American, The Common, Appalachian Heritage, Salamander, and The Mississippi Review. He lives in St. Louis and Charlottesville, Virginia.
Loading...
or
Not Currently Available for Direct Purchase