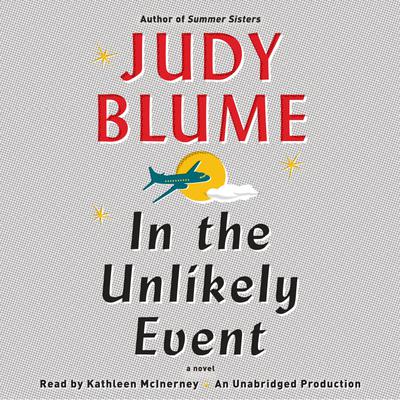 In the Unlikely Event (Digital Audiobook)

In her highly anticipated new novel, Judy Blume, the New York Times # 1 best-selling author of Summer Sisters and of young adult classics such as Are You There God? It’s Me, Margaret, creates a richly textured and moving story of three generations of families, friends and strangers, whose lives are profoundly changed by unexpected events.

In 1987, Miri Ammerman returns to her hometown of Elizabeth, New Jersey, to attend a commemoration of the worst year of her life. Thirty-five years earlier, when Miri was fifteen, and in love for the first time, a succession of airplanes fell from the sky, leaving a community reeling. Against this backdrop of actual events that Blume experienced in the early 1950s, when airline travel was new and exciting and everyone dreamed of going somewhere, she paints a vivid portrait of a particular time and place—Nat King Cole singing “Unforgettable,” Elizabeth Taylor haircuts, young (and not-so-young) love, explosive friendships, A-bomb hysteria, rumors of Communist threat. And a young journalist who makes his name reporting tragedy. Through it all, one generation reminds another that life goes on.

In the Unlikely Event is vintage Judy Blume, with all the hallmarks of Judy Blume’s unparalleled storytelling, and full of memorable characters who cope with loss, remember the good times and, finally, wonder at the joy that keeps them going.

Early reviewers have already weighed in: “Like many family stories, this one is not without its life-changing secrets and surprises. There is no surprise that the book is smoothly written, and its story compelling. The setting—the early 1950s—is especially well realized through period references and incidents.” —Booklist (starred review) and “In Blume’s latest adult novel . . . young and old alike must learn to come to terms with technological disaster and social change. Her novel is characteristically accessible, frequently charming and always deeply human.” —Publishers Weekly