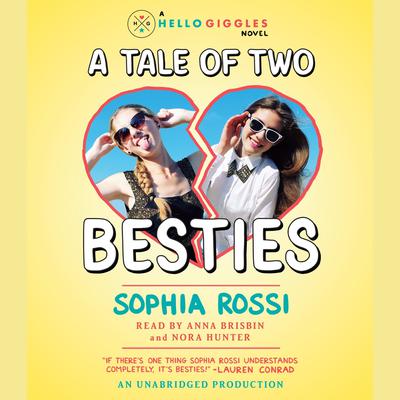 Best friends. BFFs. Soul twinsies. Whatever you want to call them, Harper and Lily were born to be besties. With high school just around the corner, casual-cool Cali girl Harper and awkward, always-costumed Lily make sure to text each other every day about their bond:

Harper: I love you so much that I am going to sneak out of detention to pay that guy from Craigslist $100 to cut off all your hair for my secret collection.
Lily: I love you so much I’m going destroy everyone in your life that matters and force you to depend and love only me.
Harper: That sounds beautiful. I love you.

Not even the threat of different high schools could throw this BFFship off-course, even if Lily begs her parents not to send her to the “dreaded Pathways," a special school for creative types, while effortlessly-popular Harper attends Beverly High with the rest of their class.

But in a city where fitting in means standing out and there’s nothing more uncool than being cool, it’s the naturally charismatic Harper--with her blond hair and perfect bone structure--who finds herself fighting the tide of American Apparel’d teens who rule the school. Meanwhile, it’s the perpetually “gawkward” Lily--who accessories every ensemble with a pair of tattered fairy wings--who finds herself flying alongside the queen bees of Pathways. Can BFF-ship survive the tidal wave of HS drama, or does growing up mean leaving some friends behind?

Inspired by the HelloGiggles community of likeminded best friends, founded by IRL besties Zooey Deschanel and Sophia Rossi, and set in a hilarious insider’s version of Los Angeles, A Tale of Two Besties will make you giggle and cry…and then tell you how cute you look with runny mascara.

“It's like my twins stepped out of the eighties and dropped down into today. Deliciously funny with heart.” – Francine Pascal, bestselling author and creator of the Sweet Valley High series

Sophia Rivka Rossi co-founded HelloGiggles, the popular internet haven for girls of all ages, along with writer Molly McAleer and her real-life bestie, New Girl star and She and Him songstress Zooey Deschanel. She has produced and written for several hit television series, including Fox’s Glee and MTV’s The Hills and The City. Born and raised in Los Angeles, Sophia's own personal and professional vision is focused on cultivating positive and safe online communities for young women, and she's particularly fond of blogs and artists that speak to tweens (and everyone's inner tween).