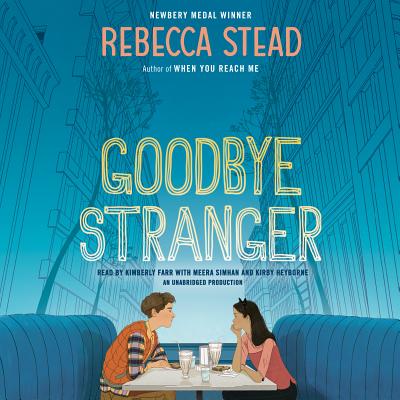 This brilliant, New York Times bestselling novel from the author of the Newbery Medal winner When You Reach Me explores multiple perspectives on the bonds and limits of friendship.

Long ago, best friends Bridge, Emily, and Tab made a pact: no fighting. But it’s the start of seventh grade, and everything is changing. Emily’s new curves are attracting attention, and Tab is suddenly a member of the Human Rights Club. And then there’s Bridge. She’s started wearing cat ears and is the only one who’s still tempted to draw funny cartoons on her homework.

It’s also the beginning of seventh grade for Sherm Russo. He wonders: what does it mean to fall for a girl—as a friend?

By the time Valentine’s Day approaches, the girls have begun to question the bonds—and the limits—of friendship. Can they grow up without growing apart?

A Boston Globe–Horn Book Honor Book for Fiction
Named a Best Book of the Year by The New York Times, The Washington Post, The Wall Street Journal, The Boston Globe, The Guardian, NPR, and more!

"... [Stead] captures the stomach-churning moments of a misstep or an unplanned betrayal and reworks these events with grace, humor, and polish into possibilities for kindness and redemption. Superb.” —Kirkus Reviews, Starred review

“The handing-down of advice and wisdom from older girls and women is a welcome theme throughout the book and far too rare in female coming-of-age stories; it’s just one of many reasons this astonishingly profound novel is not your average middle-school friendship tale.” —The Horn Book, Starred review

“The author as usual deftly interweaves her plot strands into an organic whole, and between the multifocal plot and the exploration on growth and self-recognition…” —Bulletin, Starred review

“Stead can brilliantly summon what it feels like to be a young adolescent ... [Goodbye Stranger] is  full of fun and generosity, and ... it is beautifully balanced.” —Wall Street Journal

“This novel not only sensitively explores togetherness, aloneness, betrayal and love, it also acknowledges something crucial to the business of growing up: how anyone’s personal ‘we of me’ might look different a little while from now, and later still, different again.” —Meg Wolitzer for New York Times Book Review

“Beautifully written and perfectly paced ... Stead doesn’t talk down to her intended audience (ages 10 and up) or even to adult readers long past seventh grade who may well be surprised by the flood of real-life memories her fictional world dislodges ... Goodbye Stranger will remind you of who you are.” —Houston Chronicle

“[Stead] can see into the souls of young people as they begin to grow conscious of how others view them from the outside and how they feel on the inside, and she has the skill to illuminate how they grapple with these gaps and overlaps in perception.” —Shelf-Awareness

“[A]s authentic as it gets ... This is a landmark in literature on the friendships of young women ... Goodbye Stranger packs a wallop of emotion that’s a true pleasure to be leveled by.” —The Brooklyn Rail

“Stead manages to infuse her book with a timeless quality, particularly in the way she so accurately taps into universal feelings of trying to nail down exactly who one is supposed to be. Stead’s humble story is one that is deeply felt, and perhaps one of the strongest children’s novels of 2015 so far.” —National Post