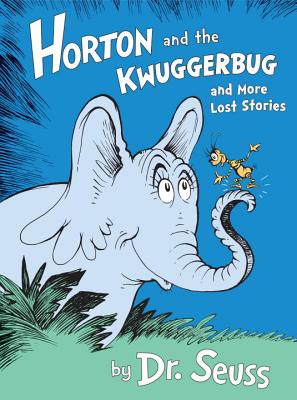 Horton and the Kwuggerbug and more Lost Stories

A follow-up to The Bippolo Seed and Other Lost Stories by Dr. Seuss!

A new Dr. Seuss book! This follow-up to The Bippolo Seed and Other Lost Stories features familiar Seussian faces and places—including Horton the Elephant, Marco, Mulberry Street, and a Grinch—as well as an introduction by renowned Seuss scholar Charles D. Cohen. Seuss fans will learn more about Horton’s integrity, Marco’s amazing imagination, a narrowly avoided disaster on Mullbery Street, and a devious Grinch. With a color palette enhanced beyond that of the magazines in which the stories originally appeared, this new volume of “lost” tales is a perfect gift for young readers and a must-have for Seuss collectors of all ages!

THEODOR SEUSS GEISEL--aka Dr. Seuss--is one of the most beloved children's book authors of all time. From The Cat in the Hat to Oh, the Places You'll Go!, his iconic characters, stories, and art style have been a lasting influence on generations of children and adults. The books he wrote and illustrated under the name Dr. Seuss (and others that he wrote but did not illustrate, including some under the pseudonyms Theo. LeSieg and Rosetta Stone) have been translated into thirty languages. Hundreds of millions of copies have found their way into homes and hearts around the world. Dr. Seuss's long list of awards includes Caldecott Honors for McElligot's Pool, If I Ran the Zoo, and Bartholomew and the Oobleck, the Pulitzer Prize, and eight honorary doctorates. Works based on his original stories have won three Oscars, three Emmys, three Grammys, and a Peabody.

Contributor CHARLES D. COHEN is a graduate of Haverford College and the Tufts University School of Dental Medicine and has been a practicing dentist for over twenty-five years. Dr. Cohen first became enchanted with the works of Dr. Seuss as a child and he began purchasing early edition of Seuss books in college. Today, Dr. Cohen's trove of Seussiana is likely the most comprehensive private collection in the world. It is his hope to create a museum to preserve the full Seuss legacy by protecting the pieces for posterity. He is the author of the The Seuss, the Whole Seuss, and Nothing But the Seuss.
or support indie stores by buying on