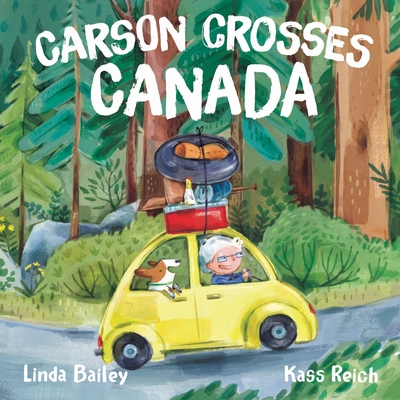 From the author of If You Happen to Have a Dinosaur comes a funny and sweet cross-country roadtrip adventure with a sassy septuagenarian and her quirky canine.

Feisty Annie Magruder and her dog, Carson, live in British Columbia, Canada, and they're setting out to visit her sister, Elsie, in Newfoundland. In their little rattlebang car, packed with Carson's favorite toy, Squeaky Chicken, and plenty of baloney sandwiches, Annie and Carson hit the road! They travel province by province, taking in each unique landscape and experiencing something special to that particular part of this vast, grand country. For example, they marvel at the beauty of the big, open sky -- and grasshoppers! -- in Saskatchewan and discover the gorgeous red earth and delicious lobster rolls in PEI, before finally being greeted by Elsie -- and a surprise for Carson!

"Reich has done full justice to many iconic Canadian places and traditions, with vivid pictures that paint just the right amount of detail. . . . What a wonderful way to introduce Canada to children. Highly recommended." --CM Magazine

"Reich’s gouache paintings, colourful and evocative, manage to capture the diversity and vastness of this land, stretching from the B.C. coast all the way to Cape Breton Island." --Montreal Gazette

"Figures are full of expression and the sheer joy of living, and children will chuckle aloud at the plentiful detail and humour. This is a wonderful read-aloud and a perfect book for Canada’s sesquicentennial that introduces the variety of flavours that make up Canada." --Canadian Children’s Book News

PRAISE FOR If You Happen to Have a Dinosaur:
"There aren't many books that have the courage to be this silly....Simply wonderful." --The Globe and Mail
• Selected as one of Today's Parent's Top 15 Picture books of 2014
• Nominated for the Washington Children's Choice Picture Book Award, 2016


PRAISE FOR When Santa Was a Baby:
"A fond, reassuring look at the eccentric childhood of a much-beloved holiday figure." --Starred Review, School Library Journal

"Bailey and Godbout give Santa Claus a backstory in this sweetly funny account, warmly illustrated with soft, nostalgic pencil and pastel artwork....[A] clever take on the Santa myth that develops him as a character with his own thoughts and motivations." --Starred Review, Publishers Weekly

Award-winning author LINDA BAILEY has written more than twenty books for children in a number of different genres, including the best-selling If You Happen to Have a Dinosaur, When Santa Was a Baby, Seven Dead Pirates and the Stanley-the-dog series. Known for her wonderful sense of humor, Linda has garnered a long list of honors in both Canada and the United States, such as the Blue Spruce Award, the Atlantic Provinces Hackmatack Award, the Arthur Ellis Award for Excellence in Canadian Crime Writing, the California Young Reader Medal and the Georgia Storybook Award. The author lives in Vancouver, British Columbia.

KASS REICH was born in Montreal, Canada. She works as an artist and educator and has spent a majority of the last decade traveling and living abroad. Kass graduated with a degree in Art Education from Concordia University and then picked up and moved to Beijing where she worked as an early childhood educator for nearly three years. Working with the little ones inspired her to start making picture books for very young learners. After Beijing she lived in Hong Kong, London, England, and Melbourne, Australia. She now finds herself back in Canada, but this time in Toronto.Kass Reich lives in Toronto, Ontario.
Click here to add Read
Loading...
or
Not Currently Available for Direct Purchase