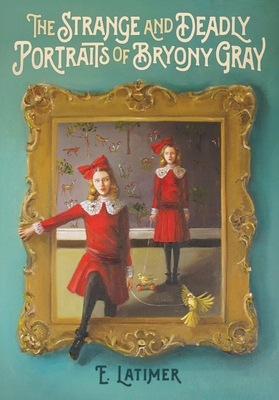 The Strange and Deadly Portraits of Bryony Gray

Bryony Gray is becoming famous as a painter in London art circles. But life isn't so grand. Her uncle keeps her locked in the attic, forcing her to paint for his rich clients . . . and now her paintings are taking on a life of their own, and customers are going missing under mysterious circumstances.

When her newest painting escapes the canvas and rampages through the streets of London, Bryony digs into her family history, discovering some rather scandalous secrets her uncle has been keeping, including a deadly curse she's inherited from her missing father. Bryony has accidentally unleashed the Gray family curse, and it's spreading fast.

With a little help from the strange-but-beautiful girl next door and her paranoid brother, Bryony sets out to break the curse, dodging bloodthirsty paintings, angry mobs and her wicked uncle along the way.

Praise For The Strange and Deadly Portraits of Bryony Gray…

"An action-packed adventure that is lightly laced with horror, there is a little something for everyone in this middle grade debut. Recommended." --CM Magazine

E. LATIMER lives in Vancouver, Canada. Her breakout success on the online writing platform Wattpad has resulted in a fanbase of nearly 90k followers, with over 20 million combined reads. She also vlogs weekly on the YA Word Nerds YouTube channel and hosts chats on Twitter. A former children's bookseller, she is focusing on her writing while still maintaining her Wattpad presence by hosting the Wattpad4 chats, which have featured guests like Lauren DeStefano, Leigh Bardugo, Beth Revis and Victoria Aveyard (among others). This is her first middle-grade novel.
Website: elatimer.com
Twitter: @ELatimerWrites