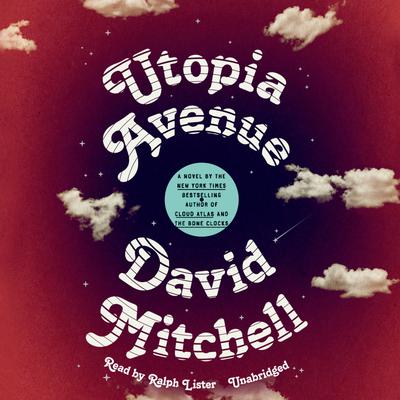 “Another delightfully addictive novel from this masterful storyteller. We get in on the ground floor witnessing the formation and rise of a rock band in London just as the British Invasion is taking off. Filled with great characters and lots of fun, inside Mitchellisms fans will love — a character named De Zoet, an album with Cloud Atlas in the title — this is a wonderful book and perfect summer reading.”
— Cody Morrison , Square Books, Oxford, MS
View the List

NEW YORK TIMES BESTSELLER • The long-awaited new novel from the bestselling, prize-winning author of Cloud Atlas and The Bone Clocks.

“A sheer pleasure to read . . . Mitchell’s prose is suppler and richer than ever . . . Making your way through this novel feels like riding a high-end convertible down Hollywood Boulevard.”—Slate

Utopia Avenue is the strangest British band you’ve never heard of. Emerging from London’s psychedelic scene in 1967, and fronted by folk singer Elf Holloway, blues bassist Dean Moss and guitar virtuoso Jasper de Zoet, Utopia Avenue embarked on a meteoric journey from the seedy clubs of Soho, a TV debut on Top of the Pops, the cusp of chart success, glory in Amsterdam, prison in Rome, and a fateful American sojourn in the Chelsea Hotel, Laurel Canyon, and San Francisco during the autumn of ’68.

David Mitchell’s kaleidoscopic novel tells the unexpurgated story of Utopia Avenue’s turbulent life and times; of fame’s Faustian pact and stardom’s wobbly ladder; of the families we choose and the ones we don’t; of voices in the head, and the truths and lies they whisper; of music, madness, and idealism. Can we really change the world, or does the world change us?

David Mitchell is the award-winning and bestselling author of The Thousand Autumns of Jacob de Zoet, Black Swan Green, Cloud Atlas, Number9Dream, Ghostwritten, and The Bone Clocks. Twice shortlisted for the Man Booker Prize, Mitchell was named one of the 100 most influential people in the world by Time magazine in 2007. With KA Yoshida, Mitchell co-translated from the Japanese the internationally bestselling memoir The Reason I Jump. He lives in Ireland with his wife and two children.