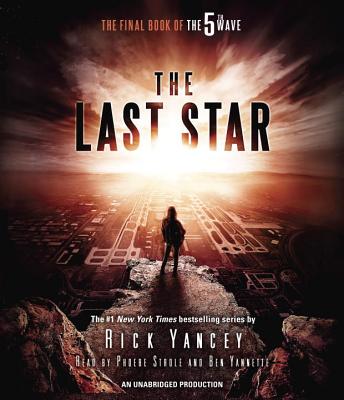 The Final Book of The 5th Wave

But beneath these riddles lies one truth: Cassie has been betrayed. So has Ringer. Zombie. Nugget. And all 7.5 billion people who used to live on our planet. Betrayed first by the Others, and now by ourselves.

In these last days, Earth’s remaining survivors will need to decide what’s more important: saving themselves . . . or saving what makes us human.

Praise for The Last Star
“Yancey’s prose remains achingly precise, and this grows heavier, tighter, and more impossible to put down as the clock runs out…this blistering finale proves the truth of the first two volumes: it was never about the aliens.”—Booklist, starred review

“Yancey doesn’t hit the breaks for one moment, and the action is intense, but the language always stays lyrical and lovely. It’s a satisfying end to an impressive trilogy, true to the characters and the world Yancey created.”—Entertainment Weekly

“Yancey has capped off his riveting series with a perfect ending.”—TeenReads.com

“Yancey's writing is just as solid and descriptive as in the first two books….What Yancey does beautifully is reveal the human condition.”—Examiner.com

"Rick Yancey sticks the (alien) landing in the action-packed finale to his The 5th Wave invasion saga . . . . And the author gives us a major dose of girl power as well, pairing Cassie and Ringer for an uneasy alliance that provides the best moments in this fantastic series’ thought-provoking and satisfying conclusion.”—USA Today

Rick Yancey is the author of  the New York Times bestsellers The 5th Wave and The Infinite Sea, the first two books in this series. His debut young-adult novel, The Extraordinary Adventures of Alfred Kropp, was a finalist for the Carnegie Medal. In 2010, his novel The Monstrumologist received the Michael L. Printz Honor, and the sequel, The Curse of the Wendigo, was a finalist for the Los Angeles Times Book Prize. When he isn’t writing or thinking about writing or traveling the country talking about writing, Rick is hanging out with his family.

Praise For The Last Star: The Final Book of The 5th Wave…

★ Loss and sacrifice intertwine with the underlying questions of morality, family, and human strength, and the resolutions of two apocalyptically doomed romances are appropriately understated, but no less electrifying. . . . [T]his blistering finale proves the truth of the first two volumes: it was never about the aliens."—Booklist, starred review


"[The Last Star] again unspools from multiple perspectives, keeping readers as off-balance as the characters, who must adjust to a world where they can trust no one. . . . After hundreds of pages of violent, nonstop action, the ending provides both satisfaction and heartbreak."
—Publishers Weekly

“An epic sci-fi novel with all the romance, action, and suspense you could ever want.”—Seventeen.com
or support indie stores by buying on
Copyright © 2020 American Booksellers Association