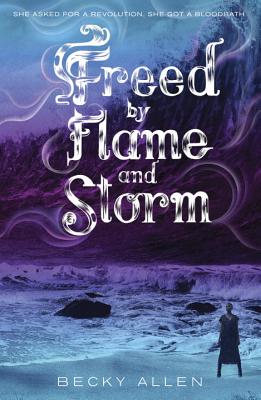 Freed by Flame and Storm (Hardcover)

For fans of Tamora Pierce and Kristin Cashore comes the exciting and thoughtful social-justice fantasy sequel to Bound by Blood and Sand.

Revolution is nigh, and one seventeen-year-old girl stands at the head of it all.

Jae used to be a slave, laboring with the rest of her people under a curse that forced her to obey any order she was given. At seventeen, she found the source of her people's lost magic and became the only person to break free--ever. Now she wants to use her power to free the rest of her people, but the ruling class will do anything to stop her.

Jae knows that breaking the curse on her people would cause widespread chaos, even unimaginable violence between the castes, and her caste would likely see the worst of it. Many would die. But to let them remain shackled is to doom them to continue living without free will.

How is one girl, raised a slave and never taught to wield power, supposed to decide the fate of a nation?

"Much food for thought and discussion; but above all, a gripping read." —Kirkus Reviews

"The action of this memorable story is fast and furious, its challenges many, and the fight for right ever-present." —Booklist

“Allen does a great job of interweaving elements of the backstory throughout...will appeal to readers looking for stories about social justice.” —VOYA

Becky Allen grew up in a tiny town outside Ithaca, New York, and graduated from Brandeis University with a major in American studies and a minor in journalism. For the last eight years, she has held various positions at TheBody.com, an online HIV resource. She is now the website director. Becky loves New York, brunch, and feminism. She cannot function without coffee. She lives in New York City with her sister, Rachel, and their cat, Lily. It was a conversation with her sister about irrigation that inspired Becky to wonder about a fantasy world where irrigation was fueled by magic, and what that would mean. Their discussion became Bound by Blood and Sand and its sequel, Freed by Flame and Storm. Visit her site beckyallenbooks.com and follow her on Twitter @allreb

Praise For Freed by Flame and Storm…

"Much food for thought and discussion; but above all, a gripping read." —Kirkus Reviews

"The action of this memorable story is fast and furious, its challenges many, and the fight for right ever-present." —Booklist


Praise for Bound by Blood and Sand, book one in the duology
“Allen’s lush debut mixes current, pressing questions with fantasy while exploring systematic injustice and historical oppression. . . . Readers will clamor for the sequel.” —Publishers Weekly

“[Jae] is a particularly courageous choice for a heroine. While this volume comes to a satisfying (if bittersweet) conclusion, there is clearly—thankfully!—more to come. Ferocious and intelligent.” —Kirkus Reviews
or
Not Currently Available for Direct Purchase
Copyright © 2020 American Booksellers Association