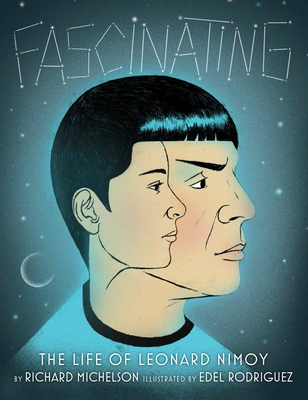 The Life of Leonard Nimoy

A moving biography of the late Leonard Nimoy, the iconic Spock from Star Trek, whose story exemplifies the American experience and the power of pursuing your dreams.

“A wonderful new biography of Nimoy for children, and […] one of the most unapologetically Jewish profiles for kids in ages. It made me cry."—Tablet Magazine

Once there was a boy named Leonard who loved to sing and to act. His parents were immigrants who felt like aliens in America, and certainly didn’t understand Leonard’s drive to perform. “Learn to play the accordion,” his father told him. “Actors starve, but at least musicians can eke out a living.”

But Leonard reached for the stars . . . and caught them. He moved to Hollywood, where he took acting lessons, and drove a taxi and took every role he could get. He worked hard, learned his lines, showed up on time, and studied his craft. Until one day he was offered the role of an alien science officer on a new TV show called Star Trek. Leonard knew what it felt like to be an alien. But did he want the role?

Fascinating is the story of how one boy followed his dreams to become one of the most beloved figures of our time.

"In Leonard’s profound absence—it is so lucky that his dear friend Richard Michelson has thought to bring us this richly illustrated account of his inspiring life. Together with Edel Rodriguez they beautifully capture some of the highlights of Leonard’s journey from immigrants’ son in Boston’s west end—to one of the most iconic and recognizable characters in the world.”—Zachary Quinto

Praise For Fascinating: The Life of Leonard Nimoy…

"There’s a wonderful new biography of Nimoy for children, and it’s one of the most unapologetically Jewish profiles for kids in ages. It made me cry."—Tablet

"Nimoy’s story is a universal one of following one’s dreams and living long and prospering in the world of the arts."—Kirkus

"…a warm and moving picture book biography. With a knack for elegantly weaving biographical and contextual details into the narration, Michelson highlights young Lenny’s early flirtations with the stage and photography…and the roots of Mr. Spock’s famous Vulcan greeting gesture in Jewish tradition.—Publishers Weekly

"…a simple but effective lesson on persistence and perseverance. Although this biography would work well as an independent read, it could also be a great option for group read-alouds In the words of Spock, 'Live long and prosper.'" —School Library Journal

“Leonard Nimoy became a legend. But, he remained a humble, compassionate, and poetic soul. A true artist. In Fascinating, Richard Michelson captures Leonard’s story with tenderness and admiration. There will never be another man like my husband.”—Susan Bay Nimoy

“I’ll never get tired of hearing stories about my dad’s childhood. Fascinating by Richard Michelson tells a wonderful and sweet story about the young Leonard growing up in Boston and his determination and passion to achieve his dream of becoming an actor in Hollywood. My dad loved his family, his life, and the arts… He will always be missed greatly.”—Julie Nimoy

“An inspirational tale of what can happen when a young man follows his bliss, his passion. And a heartwarming tribute to Dad’s incredible journey.”—Adam Nimoy

Richard Michelson was Leonard Nimoy’s gallerist and close friend. He is the author of many acclaimed books for adults and children, including Sydney Taylor Gold Medal winner and National Jewish Book Award finalist As Good as Anybody, illustrated by Raul Colón, and New York Times Best Illustrated Book and Notable Children’s Book Busing Brewster, illustrated by R. G. Roth.

Richard lives with his wife in Amherst, Massachusetts, and is the proprietor of R. Michelson Galleries. Find out more at richardmichelson.com.

Edel Rodriguez is a Cuban-born American artist and children’s book author. Rodriguez uses a variety of materials, and his work ranges from conceptual to portraiture and landscape. He is the author and illustrator of Sergio Makes a Splash and Sergio Saves the Game, and the illustrator of several esteemed picture-book biographies, including Jonah Winter’s Sonia Sotomayor and Ntozake Shange’s Float Like a Butterfly.
Loading...
or
Not Currently Available for Direct Purchase