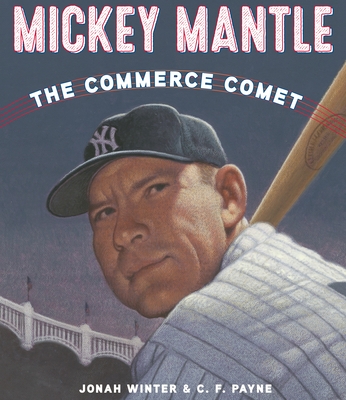 The ONLY nonfiction picture book about New York Yankee Mickey Mantle, one of the greatest baseball players of all time.

From award-winning author Jonah Winter and #1 New York Times bestselling artist C. F. Payne comes this extraordinary picture-book biography that traces Mickey Mantle’s unparalleled baseball career. He could run from home plate to first base in 2.9 seconds. He could hit a ball 540 feet—the longest home run in major league history. He was the greatest switch hitter ever to play the game. And he did it all despite broken bones, pulled muscles, strains, and sprains, from his shoulders to his feet. How did a poor country boy from Commerce, Oklahoma, become one of the greatest and most beloved baseball players of all time? This is the story.

“In an engagingly conversational narrative laced with baseball lingo, Winter (You Never Heard of Casey Stengel?!) vividly traces Mickey Mantle’s trajectory from a small child with a bone disease to one of America’s most beloved baseball players. ” —Publishers Weekly, Starred Review

Praise for Jonah Winter's You Never Heard of Sandy Koufax?!:

“Hand this book to kids unconvinced by Koufax’s mind-boggling numbers, or to the ones who know why they’re so mind boggling to begin with.” —Booklist, Starred

"Not just a home run, this book is a grand slam." —Publishers Weekly, Starred

Praise for Jonah Winter's You Never Heard of Willie Mays?!:

“Even adults who are indifferent to baseball will likely be so drawn into Mays’s story and Winter’s rousing text that they’ll want to gather up a crowd just to read this one aloud.” —The Bulletin, Starred

“An all-star gem to share with grandparents, parents, children, baseball fans and anyone else.” —Kirkus Reviews, Starred

“The Say Hey Kid had style to spare, and so does this irrepressible book.” —Booklist, Starred

Praise for Jonah Winter's You Never Heard of Casey Stengel?!:

“An entertaining account of Stengel’s career.” —The Wall Street Journal

"This engaging title will have kids sprinting toward sports biographies to learn more about the many legendary players Stengel played ball with or managed." —School Library Journal, Starred

C. F. Payne has illustrated more than a dozen picture books, including the New York Times bestselling Mousetronaut by astronaut Mark Kelly, the Texas Bluebonnet winner Shoeless Joe & Black Betsy, written by Phil Bildner, and the New York Times bestsellers The Remarkable Farkle McBride and Micawber, both by John Lithgow. He teaches at the Columbus College of Design. Payne lives with his wife and children in Lebanon, Ohio. Visit him online at CFPayne.com.
Loading...
or
Not Currently Available for Direct Purchase